DO YOU FINISH WELL? 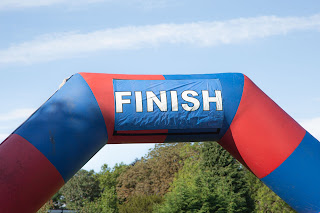 Ecclesiastes 7:8 - Better is the end of a thing than its beginning, and the patient in spirit is better than the proud in spirit. (ESV)

Now I have yelled at my wife about many unfinished craft projects. She will start something, stop, and pick it back up a couple of years later.

Now in full disclosure. I have a ton of projects that I have never started. So, I'm no better.

Better is the end than the beginning, says King Solomon. What does that mean? We've all started something with every intention of finishing. If it is one of my wife's craft projects, it's no big deal. But I've seen new businesses fold up a short time later. Investors lose money, and suppliers get stiffed. All because someone didn't keep their word.

Paul tells us in 2 Tim 4:7, "I have fought the good fight, I have finished the race, and I have remained faithful." (NLT)

Paul isn't celebrating the beginning. He is celebrating the end. In Acts 9, we read about his conversion. But what happened next? His apostleship, missionary journeys, writing two-thirds of the New Testament, starting numerous churches, and his imprisonment.

Is he celebrating any of this? No. He is glad that he is finishing well.

Notice what he doesn't say, that he beat everyone else to the finish line or did it better than anyone else. All he said was, "I finished!"

If you want to experience God's power in your everyday life, stop trying to be better, faster, or holier than anyone else. Just live your life in such a way as to honor God.

I've done enough funerals to tell you that some people are celebrated for finishing well, and others who just - finished.

Years ago, I received a call from someone who asked if they could hold a funeral at our church. The person didn't have a home church, and there wasn't anyone around to give them a decent funeral. It was one of the saddest things I had ever seen.

The room was full of drinking buddies and women who enjoyed the deceased's company. It wasn't a lot, but enough to see that his life revolved around these two things.

After the service, my friend and I greeted people as they left. One woman stood out to me. She was genuinely broken over the loss of her friend. She was the only one crying. I asked who she was, and my friend replied, "The only woman who ever really loved him. The problem was, he couldn't see it."

The blessing of your life doesn't come from being better than everyone else; they come from God. Don't miss them. Determine to finish well and honor God with what you have. When you do, He will give you power for living.

Pray: Dear Jesus, help me live my life in such a way as to honor You first. In Jesus' name, I pray - Amen.

Photo by david Griffiths on Unsplash