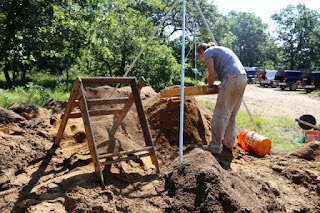 BIBLE READING 1 Tim. 3: 14 - 16 14 I am writing these things to you now, even though I hope to be with you soon, 15 so that if I am delayed, you will know how people must conduct themselves in the household of God. This is the church of the living God, which is the pillar and foundation of the truth. 16 Without question, this is the great mystery of our faith: Christ was revealed in a human body and vindicated by the Spirit. He was seen by angels and announced to the nations. He was believed in throughout the world and taken to heaven in glory.

So the story goes like this, you can read it in Genesis 26. There was a famine in the land that forces Issac to relocate in the land of the Philistines. All was well, and God blessed Isaac. But the king, Abimelech, asked him to leave. Isaac was getting too rich and powerful for his liking.

So we read in Genesis 26 17 So Isaac departed from there and encamped in the Valley of Gerar and settled there.18 And Isaac dug again the wells of water that had been dug in the days of Abraham his father, which the Philistines had stopped after the death of Abraham. And he gave them the names that his father had given them. 19 But when Isaac's servants dug in the valley and found there a well of spring water, 20 the herdsmen of Gerar quarreled with Isaac's herdsmen, saying, "The water is ours."

To live a life that honors God, we need His provision and presence in our lives. We need wells to draw from. We need the "living water" that Jesus speaks of in John 7.

So Issac goes back to the land of his father and discovers that someone has plugged up all the wells. So he does what is necessary for his family, servants, and flocks. He unplugs the wells. As soon as he does the local shepherds claim it is theirs. Issac had enough power and resources at his disposal to run these shepherds off. But he doesn't. It isn't his desire to live in contention with the locals.

So he moves on and digs a new well. No one quarrels with him about it, and he says, "For now the LORD has made room for us, and we shall be fruitful in the land."

Some have suggested that a follower of Jesus stops maturing as a follower around five years after conversion. That means that they are living in the old land they were saved in. But God has a new plan and new land for them to enjoy. To the Israelites, it was called the Promised Land, the very place where Abraham and Issac were living. God will lead you to new places in your faith. No, not a new church, but a new walk, prayer life, worship, giving, ministry, and more. It is in those places that God refreshes us anew. Here we discover new hope and life. Digging new wells gives us new purpose and a reason for living.

PRAY: Dear Jesus, help me to dig new wells where I can receive fresh life from You. AMEN