The New And Improved Gideon 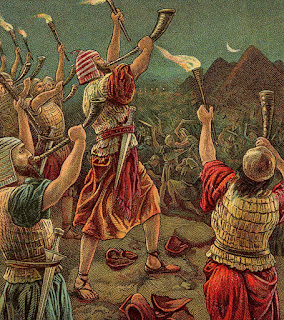 Judges 7:15 As soon as Gideon heard the telling of the dream and its interpretation, he worshiped. And he returned to the camp of Israel and said, “Arise, for the Lord has given the host of Midian into your hand.”

Gideon hears the dream and its interpretation and all of a sudden we are off to the races.

A timid man of faith returns with a confidant of a warrior with faith in the blink of an eye.

I imagine that the 300 were wondering, "What happened! Not that they were complaining, but the man that went down to the enemy camp isn't the same man who came back?

Could something like this be possible for you?  Of course, it can.  It's called faith.

God gives us a gift of faith that can rise to any occasion.  It encourages us and empowers us to do what we never knew we could do.  Gideon experienced this while listening to the dreams of his enemies fears.

Gideon always questioned himself.  He didn't question God or his plan.  When he hears the dream that in essence says, "Gideon is coming!"  When he hears his name strike fear in the hearts of his enemy.  He knew it was time.  He knew He was the man for the job.  But that wasn't in the natural.  God was doing something supernatural in his heart.

That's all he can do.  If Satan could have destroyed you, he would have done it already.  The fact that he is threatening you means you are the man or woman for the job.

Your name, your presence strikes fear in the heart of your enemy.  Your enemy knows that God in on your side and that His plan will become a reality.  They know that you are leading the charge and that there is nothing that they can do about it.