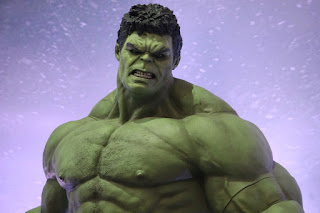 As I was watching this, from a Pastors point of view, I could see some parallels between the Marvel Universe and some Biblical characters.

For example, Samson the Hulk.

If you don't know who the Hulk is, he is one big green, indestructible angry giant who likes to smash things.  When he isn't mad, he transforms back into Bruce Banner a mild-mannered genius.

Judges 14:19 And the Spirit of the Lord rushed upon him (Samson), and he went down to Ashkelon and struck down thirty men of the town and took their spoil and gave the garments to those who had told the riddle. In hot anger, he went back to his father's house.

When Samson would lose his temper, like The Hulk, he would start destroying everything around him.  While he was ordained of God to protect the nation of Israel with his strength, he wasn't supposed to be a bully to everyone else around him.

There is a time to be angry, but sin not.  Eph. 4:26.  In other words, anger is necessary when injustice is bullying its way through.  But do not harm.

The verse also says not to let the sun set on your wrath.  Don't allow anger to become bitterness.  Deal with it and move on.  Remaining angry turns you into a big green monster that people avoid at all costs.

Anger, when coupled with other sins, amplifies the sin and its effects on one's life.  Look at Samson. His appetite for sexual sins, coupled with his anger issues led him to distrust the people he should have listened to and trust the ones who eventually broke him for a season.

Anger can give one a powerful feeling of euphoria, but it is fleeting.  God has created us to experience joy and happiness in other ways.  The big green guy shouldn't be your first choice.

PRAY:  Dear Jesus, help me to get my anger under control.  AMEN