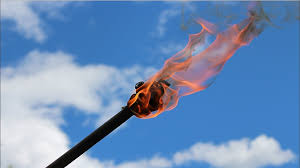 Judges 7:16 And he divided the 300 men into three companies and put trumpets into the hands of all of them and empty jars, with torches inside the jars.

What could God do with trumpets, pitchers, and torches?  What would the enemy do when they saw this spectacle?

The torches were probably sticks dipped in pine tar.  Once lit, they were tough to extinguish.

Light guides our way. John 8:12 Then Jesus again spoke to them, saying, "I am the Light of the world;

Light declares the truth.  What you see is what you get.  I remember the day after Hurricane Andrew. Everyone was waiting for the sun to come up.  What happened?  Was Miami still there.  The sun did come up, and our worst fears were confirmed.  Reality can hurt, but faith always deals with reality, never fantasy.

Light is darknesses, eternal enemy.  If you are stumbling around in the dark, what do you want?  A light switch?  A flashlight?  Why?  Because light always dispels the darkness.

Matthew 5:16  In the same way, let your light shine before others, so that they may see your good works and give glory to your Father who is in heaven.