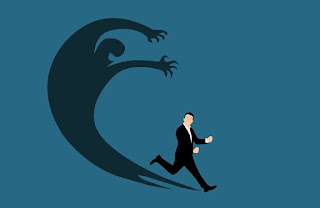 Judges 6:12 - 13 12 And the angel of the Lord appeared to him and said to him, “The Lord is with you, O mighty man of valor.” 13 And Gideon said to him, “Please, my lord, if the Lord is with us, why then has all this happened to us? And where are all his wonderful deeds that our fathers recounted to us, saying, ‘Did not the Lord bring us up from Egypt?’ But now the Lord has forsaken us and given us into the hand of Midian.”

So Gideon is in a winepress hiding from the Midianites.  An angel shows up and calls Gideon, "O mighty man of valor."  Gideon doesn't even say thank you!  Instead asks, "... why then has all this happened to us?'  This is an odd conversation, to say the least.  But what God is saying and what Gideon is thinking isn't the same.  Gideons mind is on the problem while God's words are focusing on the solution.

You will find that when God calls you to do something for Him, His will and your self-image will not line up.   But remember, God always speaks the truth. He created you with a purpose that lines up with His image.  So God isn't giving Gideon a motivational speech that He hopes will revolutionize Gideon's heart and mind.  He knows who Gideon is, even though Gideon doesn't - yet.

Gideon doesn't know why they are in trouble, thus the reasons for verse 8 and 9.  Had it been so long since Israel had heard the Ten Commandments that they had forgotten it?  I don't think so.  But I do believe that their selfishness and fear had drowned out the message.

That's why we are the might men, or women, of valor.  We are called of God to do something that will change the course of history.  Maybe not of the world, but of someone's world.

PRAY:  Dear Jesus help me to see myself for who You created me to be.  AMEN