When It All Falls Apart 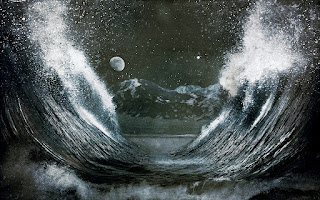 Exodus 14:1 - 2 Then the Lord said to Moses, 2 “Tell the people of Israel to turn back and encamp in front of Pi-hahiroth, between Migdol and the sea, in front of Baal-zephon; you shall encamp facing it, by the sea.

So the Jews are leaving Egypt.  They have been set free from slavery, God has answered their prayers.  God instructs Moses exactly where He wants them to go and camp, "between Migdol and the sea."

5 When the king of Egypt was told that the people had fled, the mind of Pharaoh and his servants was changed toward the people, and they said, “What is this we have done, that we have let Israel go from serving us?” 6 So he made ready his chariot and took his army with him, 7 and took six hundred chosen chariots and all the other chariots of Egypt with officers over all of them.

It is interesting to note that when you have been set free from sin - sin will chase you.  If there is a truth that I have come to know it is this.  "The Devil will always overplay his hand."  Through force and intimidation, Pharaoh thought he could get the Jews to return to Egypt.

10 When Pharaoh drew near, the people of Israel lifted up their eyes, and behold, the Egyptians were marching after them, and they feared greatly. And the people of Israel cried out to the Lord. 11 They said to Moses, “Is it because there are no graves in Egypt that you have taken us away to die in the wilderness? What have you done to us in bringing us out of Egypt?

When hell comes charging like an Egyptian army you can react like the Jews.  "AHHHH!  We're all going to die!  What's wrong with you Moses!" Or you can respond like Moses

13 And Moses said to the people, “Fear not, stand firm, and see the salvation of the Lord, which he will work for you today. For the Egyptians whom you see today, you shall never see again. 14 The Lord will fight for you, and you have only to be silent.”

God led the Jews to the spot where He was going to deliver His people from bondage once and for all.  While they thought the fight was over, God knew that Pharaoh would never leave them alone.

Often times we find ourselves in the midst of a battle.  It's painful, it's depressing, and we think - "It's all over." But God is just leading us to one more victory.  He is showing us that He has won and there the "Pharaoh's" of our life cannot own us.

Thank God for the victories that you are going to experience today.

PRAY:  Dear Jesus, thank you for facing down my enemies for me.  AMEN