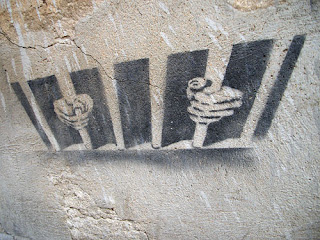 King Herod had James killed.  This pleased the Jewish leadership so much that he thought to himself, let's do it again.  So he had Peter arrested.

Acts 12:6 Now when Herod was about to bring him out, on that very night, Peter was sleeping between two soldiers, bound with two chains, and sentries before the door were guarding the prison.
Peter knows how his trail is going to go. He's going to die. So what does He do? Go to sleep. But something happens!

7 And behold, an angel of the Lord stood next to him, and a light shone in the cell. He struck Peter on the side and woke him, saying, “Get up quickly.” And the chains fell off his hands. 8 And the angel said to him, “Dress yourself and put on your sandals.” And he did so. And he said to him, “Wrap your cloak around you and follow me.” 9 And he went out and followed him. He did not know that what was being done by the angel was real, but thought he was seeing a vision. 10 When they had passed the first and the second guard, they came to the iron gate leading into the city. It opened for them of its own accord, and they went out and went along one street, and immediately the angel left him.

Now that's a jailbreak!  But notice what Peter says next.

11 When Peter came to himself, he said, “Now I am sure that the Lord has sent his angel and rescued me from the hand of Herod and from all that the Jewish people were expecting.”

Peter was convinced that it was God's will for him to die.   But now, thanks to God's intervention, he knows that He still has a plan for him.

Many times we assume that what is happening in our lives is the will of God.  That's not necessarily true.  God is more significant than our circumstances and situations.  You may find yourself, "in jail."  Meaning you may feel like your particular situation has only one possible outcome - and it isn't good.  But you serve a God who is bigger than that.  He can orchestrate your, "jailbreak" and change the direction of your life.