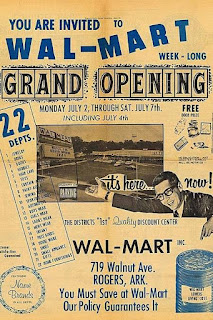 The first Wal-Mart was opened on July 2nd in 1962.  I know for some of you that isn't a big deal.  If anything it might be cringe-worthy.  Have you ever seen the people of Wal-Mart?  Google it.

But I guarantee that isn't how it started.  My mom was there in 1962.  You see, I was raised in the town the first Wal-Mart was built in.  Before that, Sam Walton had a 5 and dime store in Bentonville. She shopped there too.

1 Thessalonians 5:11 Therefore encourage one another and build one another up, just as you are doing.

Sam had a vision.  Build 4 or 5 Wal-Marts and call it a day.  It was all that he needed.  But everyone around him encouraged him to go on.  Finally in the 70's Wal-Mart was publically traded on the stock market and the rest is history.

What if Sam hadn't gone on and built that largest retail empire in the world?  Where would we be shopping today?  It's hard to tell which one of his competitors would have filled his shoes, but I can guarantee that none of them would have done it better.

Proverbs 11:3 The integrity of the upright guides them, but the crookedness of the treacherous destroys them.

Sam lived by a standard that he expected through the rest of his company.  He took care of his employees.  In the early 80's he built a gym for them to work out in.  The only other gym in the whole area was the High School gym.  He paid people more than minimum wage, he gave them discounts when they shopped at his stores, and he readily promoted hard working people.

Things have changed, apparently.  But what about you?

Who encourages you?
Who do you encourage?
How do you treat other people?
What are you willing to do to serve others?

Discover the right answers to these questions, and you will discover the secret to your success.

PRAY:  Dear Jesus, help me to treat others better than myself.  AMEN