How To Deal With Judas 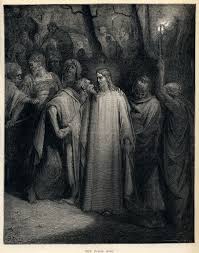 Jesus had a Judas.

We all have had or will have a Judas in our lives.

My guess, you're going to have more than one.

We've all been betrayed.  But there is a level of betrayal that seems even more painful than most.  When one is determined to bring you great pain or also destroy you - it's usually expensive both emotionally and even financially.

Luke 22: 1 - 5  1 Now the Feast of Unleavened Bread drew near, which is called the Passover. 2 And the chief priests and the scribes were seeking how to put him to death, for they feared the people.
3 Then Satan entered into Judas called Iscariot, who was of the number of the twelve. 4 He went away and conferred with the chief priests and officers how he might betray him to them. 5 And they were glad, and agreed to give him money. 6 So he consented and sought an opportunity to betray him to them in the absence of a crowd.

Why Judas did this isn't known.  The writers really had no interest in sharing that with us.  It is assumed by most that either his greed or his disillusion (or both) led to his betrayal.  Just so we are clear, the only thing that he betrayed was Jesus' position and identity.  But Judas knew what was going to happen because of his actions.  He knew that he was sentencing Jesus to death.

A word about disillusionment.  It can lead to a fantasy reasoning.  When someone has created an unrealistic reality around themselves, your truth as a follower of Jesus will challenge their fantasy. Their response is usually rooted in their fantasy, which leads them to tell untruths and betrayal.  Remember this.  They believe what they are saying and will continue to do so even in the face of truth.

So how do you deal with Judas?

Acknowledge you have a Judas.
At the last supper, Jesus did just that.  But I suspect that He knew that Judas was destined to cause Him some kind of trouble down the line.  Think about this.  Did Jesus recruit Judas to be His betrayer?  No.  He recruited Him to be His disciple.  Jesus poured His life and soul into Him just as He did the other 11.

Anyone can be a Judas.  A spouse, a child, your best friend or even your business partner.  It is usually someone that you have loved and trusted.  Do what Jesus did.  He never said that He regretted sharing His love and life with Judas.

Forgive Judas.
Jesus really had more than on betrayer.  Peter would probably be my #2 choice if I had to make one.  Denying even knowing Jesus is pretty cold.  But while Judas wouldn't seek Jesus' forgiveness, Peter would accept it.  If Jesus forgave Peter, He would have forgiven Judas.

Forgiveness is powerful.  To yourself.  Forgiveness has the power to release you from pain, regret, anger, bitterness and a whole host of negative emotions.

Help Judas, but know when to move on.
As followers of Jesus, we are to do all we can to save our relationships in Christ and to help others keep their relationship with Him.  But there can come a time and place when you have to let it go.  God will tell you when that is.  When you move on, don't look back.  Pray that God will help them deal with later in their life.

PRAY:  Dear Jesus, help me to have grace and mercy with the people who betray me.  AMEN

P.S.  For some reason I felt that someone needed this blog today.  While it is rather long, it is the truth that you need.