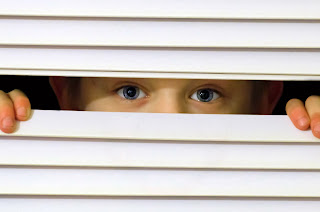 Following up on yesterdays blog, What Do You See?  I would like to ask, Are You Blind?

I started reading a book this morning entitled. Pursuing God's Will Together by Ruth Hailey Barton.  Now bear in mind that I wrote yesterdays blog before choosing to read this book.  Talk about God's timing.

In the first few pages, she relates the story of Jesus healing the blind man.  You should read it here.

What struck me was how many people were blind to the obvious.

The disciples were blind to the compassion they should have been extending to the blind man.  They were trying to figure out why he was blind.  Jesus asked, in essence, a better question.  How can God be glorified through this man?  Are we so occupied with the "whys" that we are blind to the opportunities?

The neighbors were blind to the fact that the man could see.  As Ruth puts it “we only see what we are ready to see, expect to see and even desire to see.” Their faith couldn't see the obvious.  It was the man, and he could see.  If we are not prepared to see the supernatural, we will deny or dismiss it.

It's called structural blindness.  Placing one's faith in a system that blinds oneself from raw humanity.  The Pharisee's faith in their system of belief was so strong that it blinded them from the obvious.  After the man declared that Jesus was the one who healed him, they threw him out of the synagogue. In truth, it was the best thing that could happen to him.

Jesus hears about what happened and finds the man.  Jesus reveals to him that He is the Son of Man, who was formerly blind, worships Him.

The one phrase that we've all heard from this event still rings true in our ears.
One thing I do know, that though I was blind, now I see.

May that be our prayer.