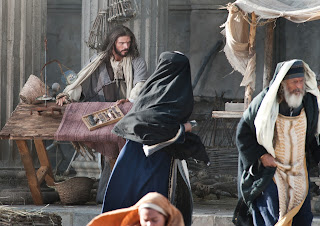 A friend of mine just did a Facebook live entitled.  The Temple Tantrum.  Thank you, Randy Brummitt, for the idea.  I apologize that I didn't get to watch the whole thing, the internet threw a temper tantrum.

Matthew 21: 12 - 17 12 And Jesus entered the temple and drove out all who sold and bought in the temple, and he overturned the tables of the money-changers and the seats of those who sold pigeons. 13 He said to them, “It is written, ‘My house shall be called a house of prayer,’ but you make it a den of robbers.” 14 And the blind and the lame came to him in the temple, and he healed them.15 But when the chief priests and the scribes saw the wonderful things that he did, and the children crying out in the temple, “Hosanna to the Son of David!” they were indignant, 16 and they said to him, “Do you hear what these are saying?” And Jesus said to them, “Yes; have you never read, “‘Out of the mouth of infants and nursing babies you have prepared praise’?”17 And leaving them, he went out of the city to Bethany and lodged there.

Either Sunday evening or Monday morning Jesus visited the temple.  Inside of the temple priests was selling animals for sacrifice.  Because many people travel long distances, they could not bring their own animals.  Now the plot thickens.  The temple only used a certain currency to do business.  So if you were from another country, you had to exchange your money for the right money.  Of course, for a fee.  These priests were making money hand over fist and Jesus said,  "Enough!"

Jesus was upset that the priests, the servants of God, were manipulating the system and taking advantage of people.  They had developed a system that worked out for their own personal gain.

I wonder at times if people don't look at Christ and His Church the same way.  "What can I get out of it?"  I've seen people go to church just so they could make business contacts or improve their status in the community.  I've seen people go to church so they could qualify for their benevolence program or get a better deal on the fellowship hall rental.

Notice what happened after Jesus cleaned the house.  The blind and lame came and were healed.  Children crying out "Hosanna to the Son of David!"  Even the kids got it!

There is a difference between, "receiving" and "getting".  When we come to, "receive" what God has in store for us, we are willing to be obedient and appreciative of His will is.  When we come to, "get" what we can get from God, we demand what we want and then wonder why it doesn't happen.

PRAY:  Dear Jesus, teach me to receive your will rather than trying to get you to bless my mess.  AMEN