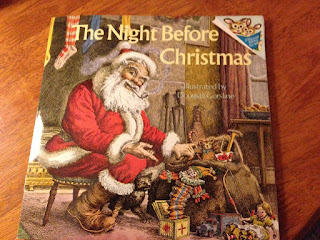 “Twas The Night Before Christmas,” was written in the early 19th century. The poem is attributed to both Clement Clarke Moore and Henry Livingston Jr. It was first published on Dec. 23, 1823, in the Troy Sentinel newspaper.

Even as a kid I was always intrigued by this poem.  It wasn't until years later that it gave birth to the whole Santa Claus craze.  (Thank you Coca-Cola.)  There was one phrase in the poem that always caught my attention.

Had just settled our brains for a long winter’s nap.

How do you settle your brain?  Now as a kid I would always be too anxious to sleep on Christmas Eve.  Eventually, I would nod off and awaken Christmas morning to a few extra presents from, "Santa."  One year Santa brought me underwear.  I turned and asked my parents if I had done something wrong to deserve that.

Proverbs 16:32 (CEV) Controlling your temper is better than being a hero who captures a city.

The holidays can be summed up in one word.  GO!  Go, go, go, go.  People are on the go and the closer we get to December 25th, the faster we have to go.  Here are a few things you may need to pay attention to.

Exhaustion can lead to depression.  If you are feeling sad, you might start with a long winter's nap.

Patience can be depleted.  If you have had it with everyone and everything, take a break.

Angry can get ugly.  Someone is always pushing our hot buttons.  Usually, we can keep it under control.  But with so many people trying to get the same thing done at the same time all that button pushing can finally get the best of us.  Walk away.  It isn't worth it.

PRAY:  Dear Jesus, let me face this season with your grace and help me keep my emotions from getting the best of me.  AMEN