Is it Breezy or is it Windy? 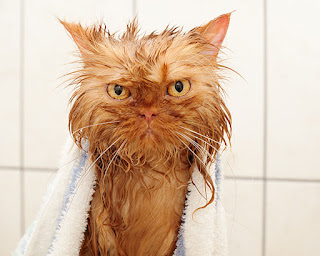 It poured this weekend.  When I got to work this morning, it looked like the aftermath of Noah's flood.  We are supposed to be in the dry season.  We are anything but dry.

So, over the weekend, a friend of mine told me a story about how someone asked them the word for "a lot of wind."  Obviously, English wasn't their first language.  So my friend said you can say either, "windy" or "breezy".  Windy made sense to this person, but breezy!?!  They had never heard of such a word.

This caused another conversation among some of my friends.  Is there a difference between, "windy" and, "breezy"?  Some said yes (citing that, "windy" is stronger than, "breezy") while others didn't seem to think that there was that much of a difference.

So all weekend I've been going around asking people, while outside, "Is it windy or breezy"?  As you might guess, I got a lot of strange looks.  But the common answer I received, while their hair was being messed up by the wind, was, "I don't know."  The thought of having to choose between one or the other left some dumbfounded.

Matthew 5:37  Let what you say be simply ‘Yes’ or ‘No’; anything more than this comes from evil.

My mom used to tell me, "Say what you mean and mean what you say."  In other words, don't manipulate your conversations to your advantage and be clear about what you intend to say.  Jesus, in Matthew 5:37, is saying the same thing.

Jesus didn't want His followers to be known for manipulation or hidden agendas.  He wanted them to be recognized for their love.  He wanted them to love one another and to love the world.  He knew that they couldn't do that if they appeared, through their conversation, to be hiding something or sound unsure of their faith.

Jesus taught us in Matthew 12:34 that from the abundance of the heart, the mouth speaks.  So what are you going to sound like today?