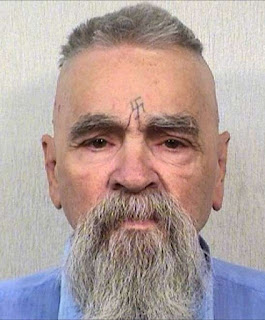 I really struggled with this one.  At first, I was going to write one, then I wasn't.  But something changed my mind.

In the 60's Charles Manson led a cult of followers who he led to commit a series of nine murders. He was convicted of first-degree murder and conspiracy to commit murder for the deaths of seven people.

This was the time of free love and peace.  A generation of young people was rising up against the Vietnam War.  Drugs such as acid and marijuana were becoming prevalent.  A wave of humanism and atheism was sweeping across America.  Then it all came to an end as the symbols of peace were found to be making war instead.  Mason became a symbol of madness, violence and the ghastly.  The nation looked at "hippies" as a blight.  Their message of free love and peace fell on deaf ears.

I know that the Bible says, "Do not judge."  Believe me, I am not.  But in all of my research, I cannot find anyone saying that Charles repented of his sins.  An educated guess would be that upon leaving this life, he split hell wide open.  This is the notion that changed my mind about writing this blog.

After his death, I heard many people say, "Good, I hope he went to hell."  The hate that Mason was able to conjured over 50 years ago has not died.  Some of these people who said this were not even alive when it happened.

John 3:16 “For God so loved the world, that he gave his only Son, that whoever believes in him should not perish but have eternal life.

God is focusing on you right now.  He wants you to trust Him with everything.  God wants you to see what He sees.  The hope, the potential, the life and the joy He has in store for you.  Even in the midst of evil, God is still there.  He will never leave you or ever give up on you.

PRAY:  Dear Jesus, help me to see the good in this world through your eyes today.  AMEN.