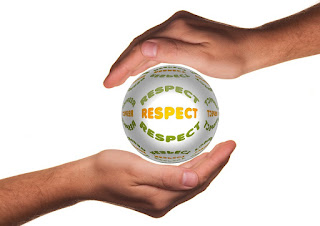 What was that famous line from Rodney Dangerfield?  "I Get No Respect"!

Aretha Franklin - Performed a song about it.

re·spect - rəˈspekt/  noun - a feeling of deep admiration for someone or something elicited by their abilities, qualities, or achievements.

Matthew 7:12  “So whatever you wish that others would do to you, do also to them, for this is the Law and the Prophets.

Romans 12:10  Love one another with brotherly affection. Outdo one another in showing honor.

Exodus 20:12  “Honor your father and your mother, that your days may be long in the land that the Lord your God is giving you.

1 Peter 2:17  Honor everyone. Love the brotherhood. Fear God. Honor the emperor.
Philippians 2:3  Do nothing from rivalry or conceit, but in humility count others more significant than yourselves.

Wow!  The Bible has a lot to say about showing respect.

#1 - Show others respect even when they don't deserve it.  Don't judge others and determine that you need to withhold your respect.  Also, if they are a jerk, be a witness of God's love to others.

#3 - Show respect with a genuine heart.  I have had people show me respect only to learn that their sole desire was to get me to do something for them.  That's not respect, that's manipulation.

PRAY:  Dear Jesus, let me show others respect today with an honest and open heart of love.  AMEN