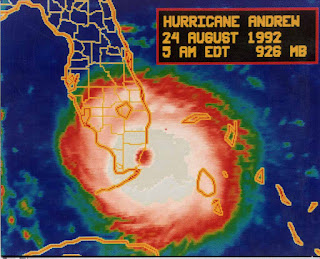 Remember the two story church that became a one story church from yesterdays blog?  Well, about a year later I met the pastor of that church and asked him how things were going?  He said, "Saint Andrew has been a blessing to us."  Now, this was in stark contrast to the man I met 48 hours after Andrew.

He went on to explain that they were able to rebuild and restore everything.  In fact, he now had a new steeple!  More about that steeple in a moment.

Gen 50:20 As for you, you meant evil against me, but God meant it for good, to bring it about that many people should be kept alive, as they are today.

Joseph had been sold into slavery by his jealous brothers.  They told their father that an animal had killed him.  But in fact, Joseph ended up in Egypt as a slave.  Then he was a prisoner.  Then he interpreted a dream for Pharoah and becomes Prime Minister of Egypt.  During a great drought, his brothers come to Egypt looking for food.  After a couple of encounters, he reveals his true identity and the family is reunited and saved from the great famine.  (The good mentioned in the verse above.)

I cannot say that I welcome Irma.  In fact, I pray that it goes out to sea and harms no one.  But if it does arrive and do damage, good can come out of it.

A few days after I met the pastor who called Hurricane Andrew, Saint Andrew I had dinner with a few of the construction workers who helped rebuild the church.  They told me the story about the steeple.  That particular steeple had been blown off the Presbyterian down the road.  The pastor saw it, retrieved it and had it installed on the top of his church.

So a few weeks later I was speaking to a denominational official who informed me that he was in a meeting with this pastor.  I asked him if he would like to pull a practical joke on him?  Would he ever!  So my friend returns to the meeting, turns to the pastor and says, "What is this about a steeple? Apparently, there is some Presbyterian church that wants their steeple back!"  They said the expression on his face was priceless!

PRAY:  Dear Jesus, only you can turn Hurricane Irma into Saint Irma.  AMEN