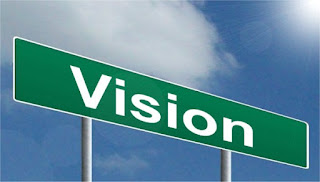 Matthew 8:13  And to the centurion Jesus said, “Go; let it be done for you as you have believed.” And the servant was healed at that very moment.

Today I had a kind of surreal moment.  We had a special guest in church today.  Teen Challenge from Davie, Florida.  Director Rick Fernandez and I have been friends for nearly 23 years.  When I came to Coral Springs, he has just arrived as the new director.  Both of us were in the same boat.  Struggling with organizations who needed inspiration.

I had just arrived from Central Florida where I served as an associate/youth pastor.  I didn't know much, but one thing I remember was a slogan that the pastor used to inspire people.  He got it from the senior pastor he used to work for in West Virgina.

I had made a banner with the same phrase on it.  Ricky saw it and took a picture of it with his group.  In today's service, Rick said that was the one thing that inspired him in those early days.  I was floored.  Today they have a wonderful center of women located on 2 acres.  That was a long time ago and vision is still becoming reality.

What vision has God given you?  Did you know that He wants it to become a reality as much as you do?

PRAY:  Dear Jesus, what do you want to become a reality in my life today?  AMEN