The Solar Eclipse and You! 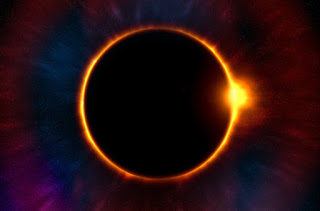 This Monday, my daughter's birthday, we will experience a total solar eclipse.  The last time this happened in the United States was 37 years ago (I remember that one) and one hasn’t passed over this country since 1918.

Some people are panicking about this.  "How are we going to protect our animals?"  "Surely we are not going to let our kids go to school are we?"  Here were my mother's instructions about this 37 years ago.  "DON'T LOOK AT IT!!!"  Yes, ma'am.

Now I have seen some of the headlines on Facebook.

Anne Graham Lotz, the daughter of evangelist Billy Graham, has written, “Is God’s Judgment Coming on America?”
- While not being dogmatic about it, she says that the eclipse could be a warning of our nation’s judgment.

Some believe that in Exodus 10:21-23 when the plague of darkness fell on Egypt for three days that this was a solar eclipse.
- No eclipse goes on for three days.

Some believe that during Jesus’ crucifixion when the sky grew dark that this was a solar eclipse.  (Mark 15: 32-33)
- We have an excellent idea when Jesus was crucified, and there were no solar eclipses during that time frame.

Revelation 6:12 talks about the Sun going dark.
- It's the Tribulation people!  Believe me when I tell you - it's worse than a solar eclipse.

Will the world come to an end Monday?  No
Will something bad happen on Monday?  I don't know, but I do know that the solar eclipse will have nothing to do with it.
Will there be a zombie outbreak Monday?  No, no, no and no.

Matthew 24: 5 - 7 5 For many will come in my name, saying, ‘I am the Christ,’ and they will lead many astray. 6 And you will hear of wars and rumors of wars. See that you are not alarmed, for this must take place, but the end is not yet. 7 For nation will rise against nation, and kingdom against kingdom, and there will be famines and earthquakes in various places.

Are there wars and rumors of wars?  Are you kidding?  Have you been following this North Korea stuff?

How about famines and earthquakes? Right now, 20 million people are on the brink of starvation, including 1.4 million children at imminent risk of death. Between 2004 and 2014, 18 earthquakes with magnitudes of 8.0 or more rattled the globe. That's an increase of 265 percent.

I don't need a solar eclipse to tell me that time is running out.

Last night, in our Advance Life Group, I started a series on Eschatology. (The study of End Times).  So here is what we know.  God has a plan.  There is a beginning (Genesis), and there is an end (Revelation).  The focus of that plan is you.  That's right - YOU!  He created you.  He provides a way, through His Son Jesus, for you to spend eternity in heaven with Him.  He loves you so much that He gave you enough information through the Bible to let you know how all of this will end.  The world will never get better, in fact, it will get worse - but don't worry.  God's got a plan just for you.

PS - Take some time to go out and see the eclipse safely.  The next one will not be until 2024.  It is a wonder of creation that God has given us to enjoy.

Tom Coley said…
I like this. I had to laugh and shakr my head at the same because of somw of the rediculous (to me at least) fears about this eclipse.
August 17, 2017 at 6:45 PM