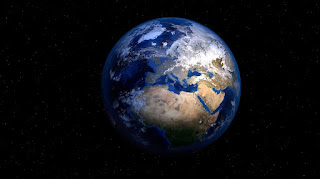 John 3:16 16 For God so loved the world, that he gave his only Son, that whoever believes in him should not perish but have eternal life. 17 For God did not send his Son into the world to condemn the world, but in order that the world might be saved through him.

The world we live in has become more unlovable every day.  I shudder to think that we, as a civilization could stoop to new lows.  But we can!  So when God says that He loves this world, how?  The verse goes on to say that He loves the world so much that He gave His one and only Son.  We know that Jesus died on the cross for our sins and rose from the grave to guarantee our victory over sin and death.  But for THIS world?

Someone might say, "Well God can love this world all He wants too, but I'm not."  I get it.  We all have war stories of how life has treated us unfairly and even inhumanly.  Why would we show any amount of love or mercy to the world around us?  But still, God loves everyone.  Jesus died for everyone. Salvation is for everyone.

Recently I posted something on Facebook that essentially said that our children are leaving the church because they don't see it as a necessity in their lives.  Someone responded by saying, "Or... they haven't met Jesus....".  I wasn't quite sure where they were going with this, but I had to think about it.

Expanding my thought to everyone, including children.

How can that happen?  These are the things that make me lay awake at night.  So let me help you, so you don't lose any sleep either.

Jesus didn't die for the world's systematic way of doing things.  He died for people.  The world is corrupt, and that isn't going to change.  But people can change.

PRAY:  Dear Jesus,  Thank you for loving me.  AMEN