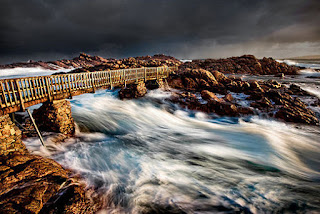 Years ago before cassette tapes and iTunes, there were records.  Unless you were a music aficionado you probably only had a hand full of albums in your collection.  Well, that was how it was around our house anyway.  But I remember that there was one album in my mom's collection that I would listen to over and over again.  Bridge Over Troubled Water

The lyrics and melody were mesmerizing to this 9-year-old boy.  I would play the song over and over again.  I knew that Simon of Simon & Garfunkle wrote the song.  What I didn't know was that Simon was inspired to write this song after hearing an album by a Gospel group.  He even called it a "sweet little hymn."

The Israelites have been wandering in the desert for over 40 years.  The day has come for them to enter the promised land.  Except there was a river in their way.  The Jordan was at flood stage.  God tells Joshua to take the Ark of the Covenant and set out to their promise.  That when the priest's feet touch the water, the river will stop.

What troubled water is keeping you from your promised land?  Don't let trouble separate you from the love of God.  Walk with the presence of God in your life today.  Don't be afraid.

Romans 8:38-39  For I am sure that neither death nor life, nor angels nor rulers, nor things present nor things to come, nor powers, nor height nor depth, nor anything else in all creation, will be able to separate us from the love of God in Christ Jesus our Lord.

Well, recently I heard the song again on Facebook.  It took me a little while, but I found the singer, a South Korean, named Sohyang.  For a moment, I was 9 years old again.  Want to hear the song?  Click here.