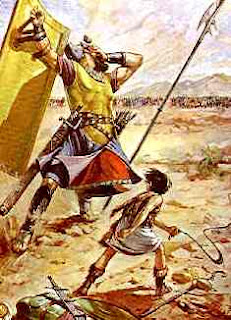 "Often times the only difference between winning and losing is momentum."  John Maxwell.

"When you have momentum it is wonderful.  When you don't - it's awful."  Russ Jones

If there is anything I know about change is this.  It can be fickle.  The change that was bringing you what you wanted can suddenly take away everything you have.  You look up at God and say, "Really?"  I understand.  But think about David for a moment.

Sometimes progress is discouraged.   In 1 Sam 17:28 we read how Davids older brother Eliab really gave his little brother an earful for asking questions.  What if David had listened to his brother and went home.  History would have turned out differently.  Don't get discouraged.  Fight it with all you have.

Sometimes it will just stop dead in it's tracks.  In 1 Sam 17:38 David puts on King Sauls armor.  It didn't fit.  While it was a good plan, it was the wrong plan.  What if David had said, "Oh well, I tried."  Then turned around and went home.  Just because progress has stopped doesn't mean that God has.

So get yourself some momentum.  1 Samuel 17:40 Then he took his staff in his hand and chose five smooth stones from the brook and put them in his shepherd's pouch. His sling was in his hand, and he approached the Philistine.  David knew what to do.  Get a smooth rock, put it in his sling and start whirling that thing around his head.  Get all the momentum he could get out of it and let it fly.

Just because progress stops it doesn't mean that life is over.

PRAY:  Dear Jesus, I need some momentum in my life today.  AMEN