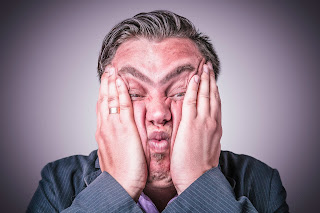 The first time I heard this was in a chapel service in college.  The speaker that morning was someone that I had never heard from before or since.  He shared an illustration that peaked my attention, and followed it up by saying, "Frustration is eventually productive."

Now to a young minister in training, I couldn't really appreciate the truth of that statement.    At the time I thought, "How intriguing?"  All the frustration I had ever known up to that point and time in my life was trying to pass my Intro. to Philosophy class and get anything better than a C in Synoptic Gospels.  (Yea, the class, was that tough.)

But as I entered full-time ministry, got married and began to experience life at it best and worst I understood.  Frustration isn't just a part of life, it is a constant.

John 16:33 I have said these things to you, that in me you may have peace. In the world you will have tribulation. But take heart; I have overcome the world.”

All of us have endured some level of frustration.  I can talk about life choices that have miserably failed.  I can talk about watching my wife struggle with the fact that she shouldn't have children.  I can speak about how making the right decision cost me more than the decision was worth.

So here are a few things I have learned about frustration that I will share with you today.

#1 - Frustration will eventually be productive if you are on the right track.
What is God's will for your life?  If you are following His direction, then trust His judgment.  Nowhere in the Bible does it say that the paths He leads us down are easy.  In fact, the Bible goes out of its way to say the opposite.  But if you are on the wrong track, frustration will never be productive, it will be destructive.  Know the will of God.

#2 - Don't take it personally.
It is a known fact that we are harder on ourselves than we are on others.  Sometimes we expect too much from ourselves.  This is where perfectionism can rise up its ugly head and possesses our thoughts.  Perfectionism only steals your joy and hope.  Give yourself permission to fail.  If you do that, then mistakes will never paralyze you again.

#3 - Frustration is a friend, not an enemy.
I know that it is like trying to hug a porcupine.  But think of it this way, if you're not frustrated then something must be wrong.  Frustration is evidence that you are doing something significant in your life.

#4 - God is in control.
Jesus said that He has already overcome the world.  All the things that we worry about have already been taken care of.  When in doubt - trust!

PRAY:  Dear Jesus, I am frustrated, but I am going to place my trust in You.  AMEN