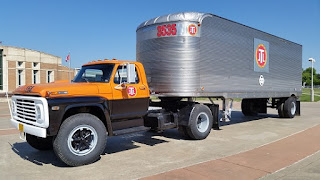 As the story was told to me.

I am from Northwest Arkansas.  Wal-mart, Tyson, Daisy and JB Hunt country.  Years ago I remembered seeing the orange and black semis that said, "Jones Trucking."  I would ask my dad, "Are we related to them?"  To which he would reply, "Unfortunately not son."

Jones Trucking, at the time, was one of the biggest trucking companies in the United States.  I would see their International brand trucks pulling their cargo up and down the road every day.  One day, a Mack truck dealer decided that he wanted to sell Jones Trucking some semis.  So the salesman made an appointment with Mr. Jones, the owner.

Mr. Jones was an unassuming man.  He ran his company well but dressed in bib overalls every day.  Later he upgraded from the overalls to coveralls.  So on the day, the Mack truck salesman came to the office he was approached by Mr. Jones.  Except the salesman didn't know it was him.  Mr. Jones asked if he could help him.  The salesman's response was something like this.  "I am here to see Mr. Jones, the owner of this company.  You can't help me, I doubt you could even buy a gas cap from me."  Mr. Jones thanked him for his time and had his secretary tell the salesman to go away and never return.  It is rumored that even when he sold the company to Sun Oil that it was stipulated that they would never use a Mack truck.

Now I don't know if all the details to this story are accurate, but it's what my dad told me.  What's the point?

Romans 2:11 For God shows no partiality.

Life can get ugly.  Sometimes after it gets done with us, we don't look that good either.  It is a lie that you have to look perfect, be perfect and act perfectly to go to church.  Nonsense.  There is an old hymn that I remember from my childhood.  "He brought me out of the miry clay, He set my feet on the rock to stay . . ."  The image this left in my mind was, "Here I am standing before God, covered in mud."  Well, that's the point.  Jesus takes us just as we are.  He doesn't show partiality.

PRAY:  Dear Jesus help me to see others today the way you see them.  AMEN