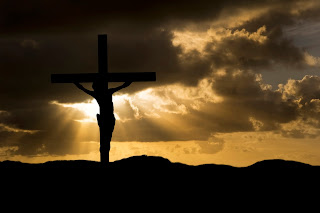 From the time that the Sanhedrin found Jesus guilty, it was just a matter of convincing the Romans to execute Jesus.

Peter has now denied knowing Jesus three times.  The rooster crows, and the Gospel of Luke even says that Jesus turned to look at Peter.  That was all Peter could take, and he ran away weeping.

The Sanhedrin hauls Jesus before Pilate claiming that Jesus is a security risk to the Roman Empire.  That Jesus' claim to be a king was in direct competition to Ceaser.  Pilate questions Jesus and after getting some simple answers determines that Jesus is innocent of these charges.  But the Jews press on.  So in an attempt to "pass the buck", he sends Jesus to Herod.  All Herod wants to see is Jesus do some magic tricks.  Of course, Jesus doesn't comply (He isn't a magician) and is sent back to Pilate.

At this trial things get serious.  It was the tradition for a prisoner to be pardoned on this day.  So Pilate allows the people to choose between Jesus (who is innocent) and Barabbas (A murdering terrorist).  Of course, he thinks that common sense will kick in and they will choose Jesus.  No such luck.  Pilate has to be frustrated now.

The Jews put on the full court press and tell Pilate that if he doesn't have Jesus crucified they will tell Ceaser that he allowed a security risk to the Empire to get away.  That did it.  Pilate didn't want to have anything to do with this anymore.  He condemns Jesus to death and then washes his hands of it all.

Jesus is mocked, flogged (which would remove the sick from his back and the back of his upper arms completely), beaten and then forced to carry the cross member of his cross uphill to Golgotha.   There his wrists and feet would be nailed to the cross.  There hanging between heaven and earth, he is rejected by men for who He is and is rejected by His Father for what He has.  Our sins.

While the Jews and Romans worked together to crucify Jesus.  It was your sins that nailed Him to that cross.  He took every sin, every trouble, every illness with Him.  He did what no one else could do.  He gave His life as a ransom payment for your sins.

At 3 pm on Friday afternoon, He gave up His Spirit.  He died.  The sky grew black.  There was an earthquake.  The veil in the temple torn from top to bottom.  It was finished.  A soldier who crucified Jesus noted, "“Truly this was the Son of God!” Matthew 27:34

Now Jesus is buried in a borrowed tomb before 6 pm.

PRAY:  Dear Jesus, I'm stopping right now and with all my heart I am telling you.  Thank You for what you have done for me.  AMEN.