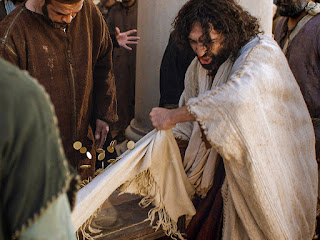 Jesus is staying in Bethany near Jerusalem.  It makes sense as Jesus was probably staying at the home of Mary and Martha.

On the way into the city, he curses the fig tree.  (We will get to that tomorrow)

Then Jesus weeps over Jerusalem.  Jesus laments the fact that there is coming a day when the city will be destroyed.  This, in fact, happened in AD 70 when the Romans under General Titus destroyed the city. Luke 19:41-44

Cleanses the temple for the second time in His ministry.  During Passover, many people came from all over the world to celebrate.  It wouldn't have been advantageous for them to bring their own sacrificial animals on the journey.  So they would purchase one upon their arrival.  But because most of the money in those days had pictures of pagan gods imprinted on them, the temple wouldn't accept their money.  They would only accept the Tyrian half-shekel.  So money had to be converted, for a price, to that sacrifices could be purchased, for another price.

Jesus walks into the temple to the smell of animals (Ever been in a barn?) and the noise of people conducting business. He said, “Is it not written, ‘My house shall be called a house of prayer for all the nations’? But you have made it a den of robbers.” Mk 11:17.  With that, he turned over the money changers tables and drove the animals out of the temple.

The temple was created, at God's command, to be a place of worship and prayer for people.  It was never set up to be a place of commerce.  Because of Jesus' death and resurrection though, He no longer resides in a temple of stone - He lives in our hearts.  What has God created you to be?  It is in known who we are and what we are in Christ that brings honor to Him and blessing to us.

PRAY:  Dear Jesus, show me who I am supposed to be so that my life will give glory and honor to You!  AMEN!