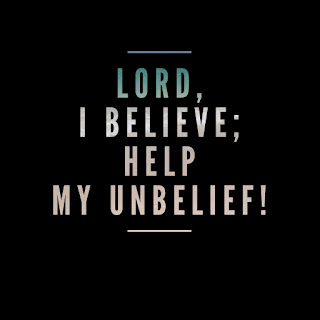 Have you ever read a passage in the Bible and wondered to yourself, "Why haven't I ever seen that before?"  Here's what happened to me.

Matthew 28:16-17 Now the eleven disciples went to Galilee, to the mountain to which Jesus had directed them. 17 And when they saw him they worshiped him, but some doubted.

Now we know that Thomas had some issues in John 20:25.  But after Jesus appeared to him, he recanted his disbelief quickly.  Here we see that there are others who still having a hard time believing that Jesus has resurrected from the dead.  Now call me weird if you like, but if the guy is standing right in front of you what more could you ask for?

Being slow to believe isn't a bad thing.  I don't see Jesus or anyone else rebuking these people for their doubts.  Apparently, the disciples were satisfied to allow these people to work through it.  If you are struggling with your faith, that's ok.  As long as you are working on it and not using it as an excuse to avoid your unbelief, you should be in good shape.

Being quick to not believe in the obvious is a bad thing.  During a meeting I was preaching at in Brazil a man stumbled into the church from the street.  He was obviously drunk and totally wasted.  At the end of the service, I asked if anyone experience some kind of miracle in their life.  Some people came forward and shared how God had indeed done something for them.  Then this man walked up and began to speak.  To make a long story short, he had been listening to me preach from the sidewalk outside.  He then responded to the challenge I had issued at the end of my message.  He prayed and was instantly sobered up.  He then began to speak in a language he didn't understand (tongues) and wanted to know what that was about.  The church erupted in praise.  But one man near me quipped, "I doubt that ever happened."  Really?

God is doing something right in front of you today.  Are you looking for it?  Will you choose to believe that He is taking action in your life today?

PRAY:  Dear Jesus, help me to see what you are doing in my life today and to give you thanks for it.  AMEN