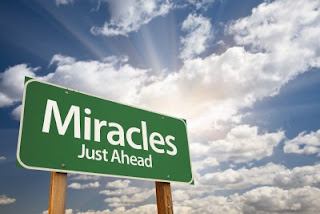 When you read the Bible, you are bound to run into a few miracles.  Raising the dead, ax heads floating, the blind seeing, just to name a few.

I've met quite a few people who have told me that under no uncertain terms does God do miracles anymore.  That was then, this is now, and God doesn't do that.  Hmmmm

During the month of March, I am speaking about miracles (Sunday's @ 10:30 am) and how we can experience them in our lives.

There are all sorts of miracles, but let's start with the one that people request the most.  Healing.

ISA 53:5 But he was pierced for our transgressions; he was crushed for our iniquities; upon him was the chastisement that brought us peace, and with his wounds we are healed.

I remember the first time I was called upon to pray for someone's healing.  I was a young associate pastor in a central Florida church.  This particular Sunday the Pastor was out of town, and I was left in charge of the services.  Between the first and second service, I was informed that one of the men who attended the church had just been diagnosed with lung cancer.  He had been given 6 months to live.

During the service, I asked him to come forward.  I led in prayer, and I gave it everything I had.  We moved on with the rest of the service and trusted God with this situation.

A couple of weeks later this man came by my office to tell me this story.  "I just came back from the doctors.  They took a new set of X-rays and then the chaos ensued.  The doctor was telling the nurse that she had brought the wrong X-rays.  The x-ray technician was called in to explain what was wrong with his x-ray machine.  Finally, another doctor came in, looked at the first set and then the second set of X-rays.  In his profession opinion, there was no mix-up. "  Then they asked my friend at what time in his life did he have lung surgery.  He said, "Never." They called a surgeon in to look at the X-ray and explain why there was scar tissue on this man's lungs.  He said, "That would be where I would make the incisions if I were doing the surgery, but I have never operated on this man."  They asked my friend what he had been doing for the last 2 weeks to which he said, "I prayed, and my church prayed for me."  With that, they declared his case a miracle and closed the file.

Miracles happen every day.  Tomorrow I'll share another one with you.

PRAY:  Dear Jesus, I believe in you, and I believe you can do miracles in my life.  AMEN

Need a miracle, write your request below and I will pray for your need today.