Connect To A Football 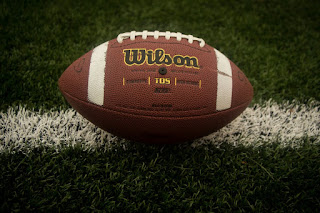 Superbowl Sunday is this Sunday.  The Patriots and the Falcons will be playing for the World Championship.

As a teen in high school, I determined that football wasn't my sport.  In my infinite wisdom, I thought that playing on a football team whose center was 6'2" weighing in at 250 pounds was a bad idea.  Why do you ask?  I was 6' and 100 lbs.

However, gym class was a requirement.  One day the coaches decided we were going to play some flag football.  After arriving at the field, the teams agreed that flag football was for wimps and we were going all out tackle.  It was at this moment that I learned the definition of communication and connection.

We all get into a huddle and the quarterback mumbled out some phrase like "Dead T 37 right".  Huh?  So I lined up where they told me, and he said, "Hike!"  The center hikes the football into the quarterback's hands who then turns around and gives it to me.  WHAT?  It was at this moment that I learned that I was number 37.  It's also where I learned the phrase, "What we've got here is a failure to communicate."

My mind said RUN!!!  But it was too late.  I got hit from behind and knocked to the ground.  This is where I learned the importance of connecting.  The kid connected with me so hard that every vertebra in my back popped.  This noise from my back was so loud it brought the game to a halt.  As I got up off the ground wondering what day of the week it was, I remember thinking this is why I don't play football.

The Bible is all about communication and connection.

Proverbs 12:18 There is one whose rash words are like sword thrusts, but the tongue of the wise brings healing.  Communicate.

1 Thessalonians 5:11  Therefore encourage one another and build one another up, just as you are doing.  Connect

In Sunday's game watch how teams communicate and connect.  Because no one is perfect, you will witness some mistakes.  These errors could cost a team the Superbowl Championship.

PRAY:  Dear Jesus, help me to connect to your Word and to hear you communicate to me today.  AMEN