The Christmas Story is Full of Stress 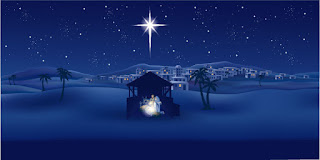 Mary and Joseph - Hey, you're nine months pregnant, but get on this camel because we have to go to Bethlehem and participate in the national census.  You get there, and there is no place to stay, except in this cave full of animals.  Which one of you wouldn't like a lovely evening with some sheep and chickens?  Oh by the way!  Mary's water broke - guess who's coming!!  Now usually Grandma and/or a midwife would be available to help deliver the baby.  The Bible doesn't tell us if there was anyone around to help, but I get the feeling that Joseph had to step up to the plate.  I wonder if he was thinking, "I don't know anything about delivering babies!"  Let's go outside of town for a few moments; we will get back to these two later.

Shepherds - So an angel and his choir show up to announce the arrival of Jesus.  These angels don't feel any stress, but the shepherds?  Well, how would you feel if an angel and a heavenly host singing awakens you from a deep slumber?  I mean, sure they would have perfect pitch, but really?  These shepherds had to be shaking in their sandals.  Yea, no stress here!

Wise Men - We know that the wise men were from a fire, I mean afar.  They probably were from the area that we call Iraq.  Because they met Jesus in a house and because King Herod wanted to kill all the children in Bethlehem under the age of two we can surmise that they had been traveling for quite some time.  How would you like to leave your job and family to chase a star?  Yea, no stress - NOT!  Then you are warned in a dream not to return the way you came because the guy you talked to in Jerusalem (King Herod) is a murderous creep.  Yikes!

Back to Mary and Joseph - Joseph has a dream where an angel tells him -  MOVE!  Move to Egypt.  Really?  In a time when people would live and die within a few miles of their birthplace, Mary and Joseph were becoming world travelers.  Mary!  Back on the camel.  I bet she and a couple of flashbacks.  Joseph is thinking.  I just built this house now I have to go to Egypt and do it all over again?  Nope, no stress here.

King Herod - This guy was so paranoid that his stress had stress.  When he would get stressed out, he had a sure fire way of dealing with it.  Kill it.  He had his brother in law, mother in law, his second wife and three of his sons killed.  That was the short list.  Even when Joseph could return to Israel, after Herod's death, he moved to Nazareth because he didn't trust Herod's successor who was one of his sons.   So when some wise men from a foreign land come and ask, "Where is the one born King of the Jews." Herod loses it!

Why did I write this?  Someone else's Christmas stress was stressing me out today.  I didn't think that was fair until I read the Christmas story and discovered that life wasn't perfect - God still provides in imperfect situations - some people are going to share their stress with you and God has a plan.  There, I feel better now.