When faith puts on a full court press. 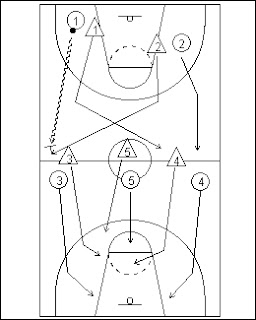 When your faith puts on a full court press.

It's a basketball term, "full court press."  It's a defensive tactic in which members of a team cover their opponents the full length of the court and not just near their basket.

I read this story about a girl's junior basketball team that went on to win the California state championship.  The coach was from Mumbai, and his name was Vivek Ranadivé.  When Vivek agreed to coach his daughter's basketball team he openly admitted that he had never played basketball and that he thought it was a mindless game.

He chose to coach on two principles.  #1 Do not raise his voice.  He was coaching a group of 12 and 13-year-old girls.  He knew that shouting wasn't going to work.  #2 He choose to use the whole basketball court.  He couldn't understand why a team wouldn't use all of their regulation court, which was ninety-four feet long.

Oddly enough, this frustrated the other teams.  They called it cheating, but it wasn't.  They only exploited their team's weaknesses.
Story from From: Malcolm Gladwell. “David and Goliath.”

Do you allow your faith to put a full court press on your fears?

When you allow your faith to press in on your fears, it exploits your fears weaknesses.  Here is a truth about fear that you can bank on.  Fear is afraid.  Fear isn't stronger than your faith - it isn't wiser or smarter.  It's a bully that when confronted is afraid of itself.  Being that it is Halloween today, think of it this way.  Fear is like someone putting on a scary Halloween mask, looking at themselves in the mirror and screaming.  Fear is afraid.

When Gideon lined up his men and shouted "A sword for the Lord and for Gideon." the fear that had occupied Gideon's heart was now transferred to the enemy's camp.  They turned on each other - they ran away from Gideon and his army - they were terrified.  Judges chapter 7 says that the 300 pursued the Midianite army over 50 miles.  Get this!  300 chasing 120,000.  Now that's some serious faith.

What fears do you need to face today?  Put a full court press on them and let's see what God can do!