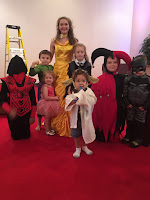 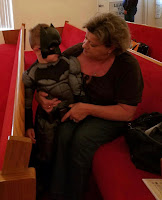 What a great day at FFWC!  The kids had a great time during our Fall Festival Party.  Allowing our children to dress up in an encouraging and positive environment is always a better choice than embracing the dark side or celebrating Halloween. 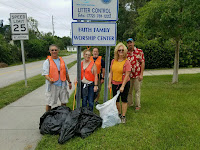 This Saturday a team from FFWC cleaned Cornell Ave. Through the Adopt a Road Project.  Thanks to everyone who participated.   (FYI - Soup Kitchen is this Sunday.  If you would like to help, please email Donna Shurr at dshurr.ds@gmail.com)

WHAT A GREAT DAY AT CHURCH!  We celebrated communion together - worshipped God with all our heart - concluded our series The Joy Of . . .  - Gideon was a good leader; he just didn't know it.

When Gideon went back to the camp and told his army what they were going to do, one of the things he said was to shout, "A sword for the Lord and for Gideon’”  (Judges 7: 20)

This phrase intrigues me.  Not so much as to what was being said, I get that, but how it was stated with passion.

I don't get the feeling that these 300 men were standing on the edge of the camp whispering, "A sword for the Lord and for Gideon".

I also don't think that they mumbled.

I don't believe that they were waiting for someone else to say it before they said it.

I don't think that these men qualified what they were saying.  "Um! If you don't mind, A sword for the Lord and for Gideon, however, if that doesn't fit your agenda right now I can completely understand that."

I don't get the impression that they spoke with Gideon about the phraseology, questioning whether they should use the word "sword" or the fact that Gideon's name was included in that statement.  "Oh, Gideon you're prideful now, this isn't about you."

I have a sincere belief that these 300 men stood shoulder to shoulder in unity and shouted with all their heart, "A sword for the Lord and for Gideon."  They did so with purpose, feeling and passion.  They were happy to be standing on that hill, and there were even more pleased to deliver the message of God and Gideon.  The Midianites were in deep trouble, and the faith of 300 men gave that message to the enemy.

Can you be a sword for the Lord?  Can you allow your faith to shine in a dark world?  Can you stand at the edge of what scares you and declare God's truth to your fears?