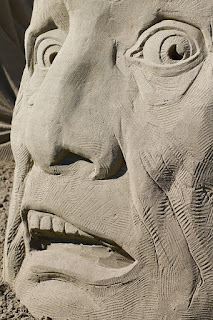 Last Sunday I shared with you how you have to face your fears.

Gideon was such a person, who before he could BE the Judge of Isreal and General of its army had to face his fears.

There is a difference between BEING and OCCUPYING.  People with posts and titles do what they can to occupy their position.  Individuals who firmly believe that what they do is a God-given calling  feel empowered to BEcome something more than a title.

You've seen them.  The position types who are willing to give orders, but their actions never really say, "I care" or "I believe in . . .".  Then there is the person who not only leads but exemplify's what they believe through their actions.  Big difference - YES?

So God tells Gideon, "Hey!  If you're still afraid, go down to the edge of the camp and listen to what is going on.  Oh, take your servant with you too."   Gideon needed to make this trip to the edge of danger.  You need to make the trip too!  It was in this moment when Gideon discovers that God had been working behind the scenes the whole time.  The Midianites were afraid of Israel's God and Gideon.  So why don't you make the trip?

Does pride keeps you away from the enemies camp?

Gideon was afraid.  Sometimes you don't' want to admit that you're human.  There's nothing wrong with admitting that something scares the living daylights out of you.  But if you are not willing to face your fears - because you're afraid of people knowing that you're afraid - you will never discover what God is doing on your behalf.

Does your fear keep you away from the enemies camp?

Gideon was afraid.  The very thought of getting close to our "enemies" can scare us like a creepy clown on Halloween.  I use quotation marks around enemies for a reason.  Your enemies can be what you imagine versus what is real.  Not asking for a pay raise because you're afraid of your boss or supervisor.  Not pursuing a relationship, but you're afraid the other person doesn't like you.  Not mentoring or teaching a young person, but you're afraid you're not good enough.  You will never know until you try.

Does the possibility of change keep you away from the enemies camp?

Gideon was afraid.  What's going to happen if you go down to the enemies camp?  Is something going to change?  Yes!  That's the whole point of taking the trip.  Just like a field General receiving an important piece of intel changes his strategy - so does seeing God's influence on your life.  It changes what you do and how you do it.  BUT!  Do you want to change?  Some people stay away because they are comfortable with where they are at.  They are afraid, but at least they know how to "manage" it.  Those quotation marks are for another day.

Gideon trusted God even though he couldn't completely understand what He was doing or why He was Gods' chosen man of the hour.   Gideon was afraid, but the possibility of reward was greater than his fears.  It is when Gideon faced his fears that God showed up.  But that is tomorrow's post.

#1 - Identify why you don't face your fears.
#2 - Formulate a strategy (path to the enemies camp) to face your fears one time.
#3 - Take someone on the trip.  God encouraged Gideon to take his servant with him.  Borrow someone else's courage until you can find your own.
#4 - LISTEN to the very thing that scares you.  (Oops, that's for tomorrow)