For the last few days, I have been saying that we were going to make a big announcement at church.

But let me show you how we got here.

A few months ago, Duke Matlock of the founder of Invest Leadership Initiative and I set this date for him to come and speak at my church.   Duke is my personal coach, and I wanted him to come and inspire the people to pursue change like he has inspired me to.

A few weeks ago someone stopped by my office to share with FFWC an offering of $3,400 that is dedicated to replacing some carpet in our church.  Now does the carpet need replacing?  It's fire engine red and has been there since 1979.  Now before you get an image of this horribly stained thread bear carpet, it isn't.  It looks as good as the day they installed it.  I think it's the same carpet the Israelites used while in the desert.  Remember?  Nothing they had ever wore out.

A couple of weeks after that.  One of our sister churches (I'll give the name later as soon as I get clearance too) informed me that they were going to remodel their sanctuary and that they wanted to give us 170 of their beautiful church chairs!  THAT'S THE BIG ANNOUNCEMENT! 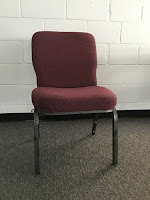 After I told the church leadership team about the chairs, they immediately said that we need to change the carpet.  Can you imagine their surprise when I told them that someone had donated $3,400 to that very project?

Immediately, an observer to the conversation pledged $1,000.  Since then another $1,000 pledge came in.

So all of these things begin to converge together.  I was starting to wonder what was going to happen today.

When I told everyone this morning what I just shared with you, the sanctuary erupted with praise unto Jesus.  There was no doubt in anyone's mind.  God is in this.

Duke called me Saturday evening and asked me, "Are we doing a fundraiser tomorrow?"  I told him no.  In my mind, we could do that in a couple of weeks.  I still wanted him to come and inspire people to embrace a culture of change that allows them to receive everything from God that He wants to give them and give everything to the people that need them.  I thought his message would simply be empowered by the excitement of the big announcement.

But there was a problem.  A few weeks ago when we prepared for today, we determined what we were going to do.  Duke couldn't remember what it was so he asked me.  For the life of me, I couldn't remember either.  When he arrived this morning, he had three messages to choose from and no clear direction from the Holy Spirit as to which one he should share.  I wasn't worried about it.  I've been there before, and the Holy Spirit always comes through.  So was it message #1, #2 or #3?  It was none of the above.

When Duke started sharing from his heart, story after story began to flow.  One revelation of faith began to reveal itself after another.  I'll be honest with you.  I've got to listen to that message again.  I can't remember every great thing that was said.  But I do remember this because my knees buckled when he said it.  The church can go no further if it thinks it has reached its full potential.

Today wasn't about carpet and chairs.  It was about faith.  It was about reaching God's potential as a people.  That cannot happen unless we realize what we can reach as a follower of Jesus.  Duke wept.  I wept.  It was a beautiful day.

This week, 21 years ago I came to FFWC.  In those days it was named First Assembly of God.  Last year FFWC celebrated 65 years of history.  But 21 years ago I knew this church had never reached it's potential.  I knew that it's best days were yet to come. I knew that God had a good reason for my family and me to be here.  But as many prophets of old, I had reached the place where I was saying, "When God?  When?"