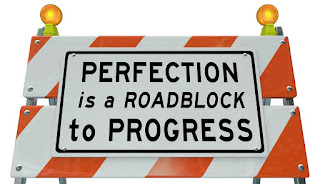 You didn't have to say AMEN so loud.

No this isn't a blog about every humiliating thing I have ever done.  That wouldn't be a blog that would be a book.
This is a story about my journey from crazy to calm.
I will admit that I am a reformed(ing)(ish) perfectionist.  But starting this journey wasn't easy for me.  It started with one question.  Why?
"Why?" is a question that can make you defensive.  Why did you do this?  Why did you do that?  So asking a perfectionist the "Why?" question can be a direct threat to their existence.  They might think that the wrong answer would suddenly make them vanish into thin air.  Drastic?  Maybe - but true none-the-less.
Most people think that perfectionists hate everyone.  Not true.  Perfectionists love people.  In fact, they may love them too much.  A perfectionist performs for the praises of others.  Without that praise, they will never feel, "perfect".  Praise gives them a sense of self-worth and value.
The reason why I was such a perfectionist was because of my own self-worth or lack thereof.  I loved hearing people praise me!  However, I chose skills that didn't allow for any mistakes.  If you play the violin, don't play a sour note.  If you play the piano, don't hit the wrong cord.  If you are going to teach, don't get your information incorrect.  If you are going to speak, don't bore them.  Get the picture?  Standards were high and the price tag for perfectionism was too high.
Early in my career, I served in a church that played to my perfectionism.  If I didn't perform I would be unemployed.  I burned out and quit.  Oddly enough, they were firing me at the same time.
My next job was completely different.  The pastor didn't expect me to be perfect, he expected me to do my best.  He forgave mistakes and encouraged me regardless.  What a concept!
But the moment that I realized what perfectionism really was, I chose to change.  You see, perfectionism isn't a mental disorder, even though it might make you crazy.  It's a false idol.  I gave my performance more attention than God.  It was my form of salvation.  If I performed "good enough" God would be pleased with me.  If people were pleased with me, then God would have to be pleased with me because He wanted me to please people.  Yup!  Twisted.
It was a string of personal failures that finally caused me to collapse and give up.  It was in that moment that God informed me that He still loved me and thought the world of me.  I thought to myself, "I have failed!"  Not in His eyes.  Oh sure I made some mistakes but nothing that would derail God's plan for my life.  When I realized and accepted that, everything changed.
Excellence no longer became my holy grail.  A relationship with Jesus that gave Him permission to love me did.
Things that use to bother me didn't.
People that use to drive me crazy didn't.
Personal flaws don't devalue me anymore.
Failures no longer defeat me.
Sure there were a lot of people who wondered what happened?  A few even distance themselves from me because they couldn't understand it.  But the vast majority were very happy with the new me.  Now that isn't to say I don't have my relapses.  But I have learned to see them for what they are, and apologize very quickly.  That doesn't mean I don't set high goals and standards.  I just refuse to worship them.