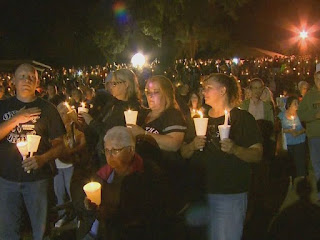 Yesterday we watched in horror as another gunman opened fire at a community college campus in Oregon.

Yesterday we watched as a President touted his utopian stance on how we need to remove guns from society.

Yesterday we learned that the gunman specifically targeted Christians to kill in cold blood.

Yesterday we tried to understand it all and again we are left with more questions than answers.

However, from what the media and authorities have released I believe that we know more than most would like to admit.

We see the picture of a man who is desperate and disillusioned with life.  He is obsessed with death and suicide.  But then there is this one caveat that caught my attention.  His disdain for organized religion.

Now I am the first to tell you that I don't like organized religion anymore than anyone else.  Religion, by definition is man reaching up to God.  I don't know about you, but I read the story about the tower of Babel - that didn't work out so well did it?  Christianity by definition God reaching down to man through His Son - Jesus.   I prefer the that.

But here is the question that is weighing in on my heart?  Did this young man ever have an encounter with a real follower of Jesus?  Did he ever experience a real church that showed him love, acceptance and forgiveness?  Oh you might say that these things don't exist.  You couldn't be more wrong.  There are millions of followers and thousands of churches who stand ready to represent Christ.  Their focus isn't their organized religion - their focus in on Christ and people.  Broken, needy people.

I cannot be an armchair quarterback and "guess" what went right or wrong with this young mans life. I can however say, that Jesus loved him and undoubtedly, more than once, reached out to him.  I know that Jesus offering him hope and life.  But the sounds of the godless world beating in his head drowned out the hope with their anti-religion, anti-Jesus banter.  He tried to fit into a world that was never going to let him "fit in".  Frustration and despair became his heart which found the most horrible way to express itself.

Our prayers are with and for the people of Roseburg, Oregon.  That they will not allow this young man to shape the rest of their lives.  But they too will find hope in this horrible time.  My prayer is for the followers of Jesus and the churches of that area - that they will have a clear and concise message to their community and even the world.  Hope isn't lost.

Albert Pujols said…
This comment has been removed by a blog administrator.
February 13, 2016 at 2:06 PM