THE DIFFERENCE BETWEEN STARBUCKS AND DUNKIN DONUTS. 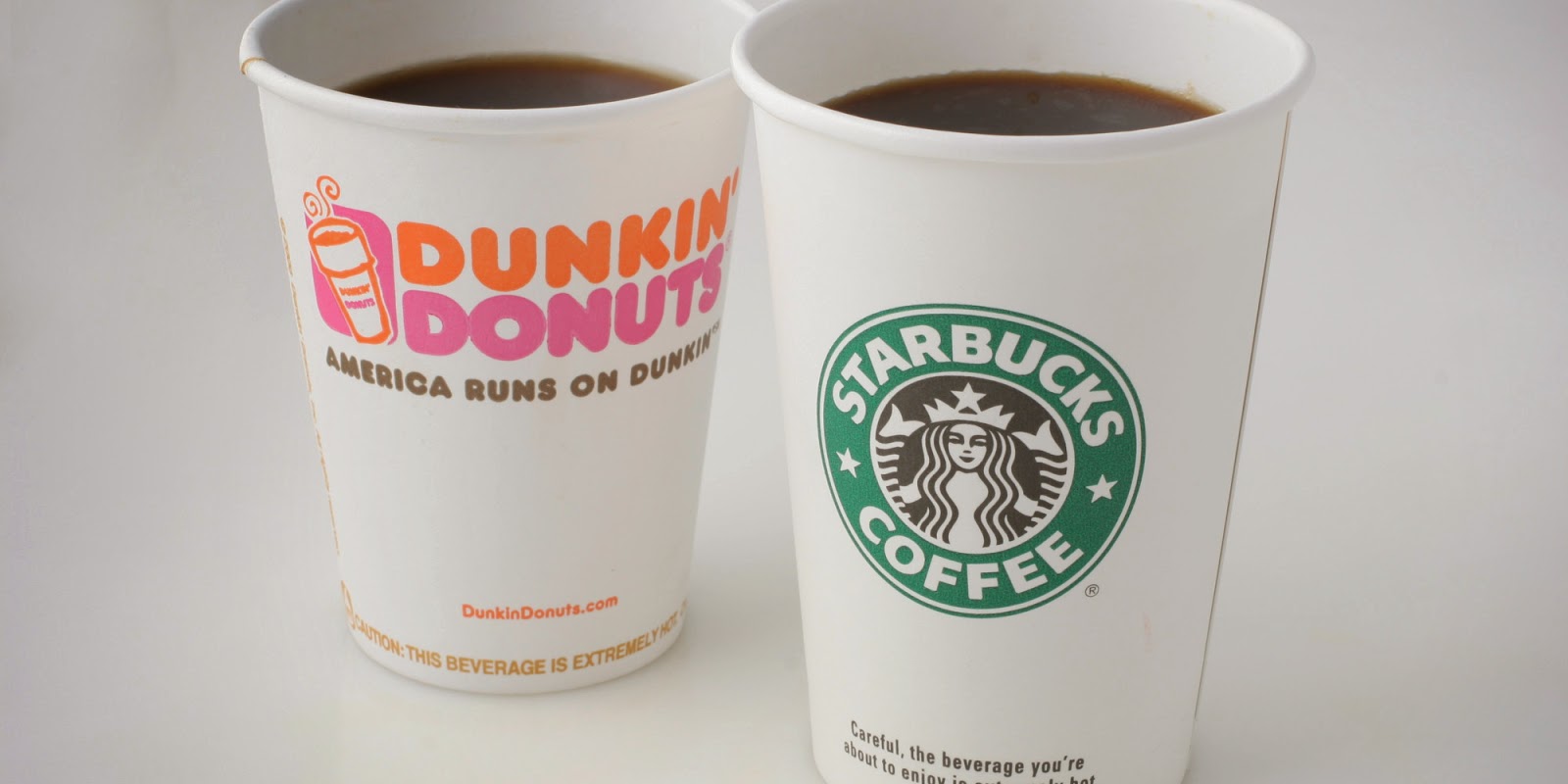 Because both are known for their coffee (believe me, coffee snobs everywhere have debated “who has the better coffee”) many people assume that they do the same thing.  But that’s not so.

#1 - Starbucks serves coffee and other stuff
If you walk in to Starbucks and order a Venti Iced Skinny Hazelnut Macchiato, Sugar-Free Syrup, Extra Shot, Light Ice, No Whip - they know what to do.  If you order a pastry or some other food item, it seems to irritate them and cause chaos behind the counter.

#2 Dunkin Donuts serves donuts and other stuff
If you walk into a Dunkin Donuts and order a Venti Iced Skinny Hazelnut Macchiato, Sugar-Free Syrup, Extra Shot, Light Ice, No Whip - they will throw you out.  If you order 3 dozen donuts with 2 of every different kind of flavor they offer - no problem.

Starbucks is dedicated to the detail
Starbucks #1 goal is to make sure your coffee is right every time.  All their food is prepackaged and pre made to be warmed and served (thus removing the possibility of messing it up).

Dunkin Donuts is dedicated to the big picture.
If you come in and order a large coffee with 2 sugars and a Boston Cream Donut, your in good shape.  But keep it simple.

Now I walk in Dunkin Donuts.  If you don’t know, I will if at all possible, never drink coffee from a styrofoam cup.  Call me picky, but it changes the flavor.  So this is how I order a black cup of coffee at Dunkin.  “I would like a black up of coffee in a large latte cup (which is cardboard), no styrofoam.”  They have never questioned me about the coffee.  Black is black.  But they will pour the coffee into a large styrofoam cup and then pour it into a latte cup.  I hand it back to them and tell them to try again.  This is follow by a look that says, “Why are you not at Starbucks?”  I tell them that the heat of the coffee releases toxins from the styrofoam and changes the flavor of their coffee.  (This is true)  They tell me that they have to pre measure the coffee to make sure that I am getting a large cup of coffee.  I tell them that the cups are the same size, if you will just look at it.  A manager is usually called forward, who looks at his employee like, “You did what?”

Are you a Starbucks or a Dunkin Donuts kind of person.
The answer to this is usually found in how you manage your life.  Do you see what you do and how you do it as something creative?  Joy comes from getting the details right?  You’re probably a Starbucks person.  (You may not drink their coffee, but you can appreciated how they make a cup.)  You love the big picture, but you love getting all the nuances of that big picture even more.

But, if you’re not all that excited about the details, you’re probably a Dunkin Donuts type of person.  (Again, this has nothing to do with your choice of coffee.)  Joy comes from seeing the big picture fulfilled.  The project is completed.  The goal was achieved.  You did something great!

What does this say about you?
Starbucks people are typically stereotyped as hip and contemporary with relatively high incomes.  They are socially connected through media and rely heavily on technology.  Holding a Starbucks cup in your hands makes you look cool and successful.

Dunkin Donuts people are seen as Average Joe’s.  They want to get their cup of coffee and go.  They are blue collar, mid to low income people who need a java hit at some time.  They don’t care if they look hip, coffee is a function of their life - they don’t need a cool cup to justify their existence.

The reality is
People who are successful are big picture people.  They are leaders.  They delegate details to others and focus on motivating their teams to do the best they can do.  They don’t need a lot of praise from others to motivate them and move them along.  The opinion of a few key people is good enough.  They are self driven, sometimes to a fault.  But they work hard and waste little time or effort.

Detail people work well on teams, as a general rule.  They enjoy collaboration and being part of the big picture.  They like to build relationships with the people that they work with on a profession and personal level.  They need to hear praise on a consistent basis, as that is how they gauge whether or not they are doing their job right.  They are driven, but do not want to do it alone.

And you thought that the Starbucks people were the successful ones?  Nope.  It’s been Dunkin Donuts all the time.

Unknown said…
I don't know which one I am... Actually I detest Starbucks coffee. Love Duncan Donuts.