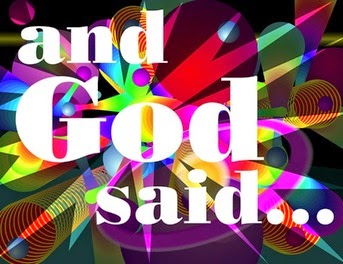 Now to be honest with you - I usually take that as a caution sign.  When people use God as an excuse to get what THEY want - trouble is going to follow.

There is a simple process that you can use to determine if what they said is what God said.

#2 - What they say honors God and His will.
There are some things that the Bible doesn't specifically talk about.  But if we know His Word and His Character - it usually isn't very hard to discover His will.  I'll go along with it because it honors God.

#3 - They are willing to allow what they say to be tested by others of faith.
This tests the attitude of the person who is saying, "But God said . . ."  People who assume an attitude or superiority over others usually get it wrong.  But humility always leads people to wisdom and life.

#4 - Square pegs, round holes and patience.
Are they trying to force this "will" on others?  Are they trying to "push" the timeline along.  Are they willing to be patient and allow God's timing to be their time?  They might know God's will - but their impatience will only ruin their blessing.

What do you do when they are right?
REJOICE!  Glorify God for what He has done!

What do you do when they are wrong?
Understand your relationship with them?  Do you have the right and/or authority to speak into their life?  (FYI Authority without relationship is worthless). Help them discover what's amiss.  If you can't, discover who can.  Ask for their help.  Preaching to them usually doesn't work.  Ask them questions that will help them connect the dots.  For example, "If God wants you to do .... then why does His Word say .....?"

What do you do when they are messing it up?
Again, do you have the right to speak into their life.  If you do, sit them down and ask them what they are doing.  Listen, listen, listen.  The reason, usually a fear, will reveal itself.  Address the reason and support them as they learn.

Know that God will test our faith.
Yep!  It's in the Bible.  James 1:3 (CEV) You know that you learn to endure by having your faith tested.  I've seen God ask people to do things that A) Never happened and B) He never followed through with.  I can hear some of you right now!  "Oh God would never do that!"  Which my response would be, "Really?  Every heard of a guy named Abraham?"  Look it up in Genesis 22.