When We Complain Our Way Into Oblivion 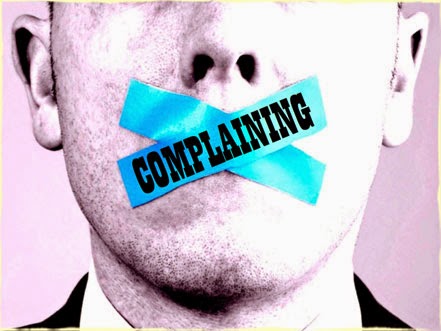 Years ago I was preaching and used an old line that I'm sure many of you know.  "Would you like some cheese with that whine?"  A few days later a woman brought me a wedge of cheese and told me that she was a whiner.  That Sunday she discovered that the problem wasn't everyone else, but herself.  She wanted to quit whining and complaining.

Complaining is second nature to all of us.  We can do it at the drop of a hat.  In fact, I think we can do it before the hat even hits the ground.  We complain when things don't go our way.  We'll complain even louder if we think that we know better than anyone else.  Now I have observed that there are different kinds of complainers.

These people complain until they get what they want.  They are professionals.  Really!  They get paid to complain.  They get paid when they get their way.  I've seen people complain about something followed by a threat of action on their complaint.  It's always negative like: "I'll quit giving my money if you don't . . ."  or  "I'll stop shopping here if you don't . . . ".  You get the picture?

These people complain with a purpose.   Complaining isn't bad, if you have a good purpose in doing so.  If you are going to complain about something, follow it with a solution.  "Here is my problem, but what if we did this . . .?"  Now I'm not saying that your solution will work.  But instead of whining about something - be an active part of the solution.

So which one are you?

Now let's apply this to your life - what would happen?

Let's take your Marriage for example.  If you are a Level 1 complainer, you will always be miserable.  But you will not do anything about it.  You will not take some kind of positive action to begin restoring your relationship with your spouse.  You will not allow your marriage to achieve a place where you can find security and joy.  Most of the time, the other spouse will eventually divorce.

Let's take your Job for example.  If you are a Level 2 complainer, you will be unemployed - A LOT!  At best, your employer and fellow employees will hate your guts!  If you try to get some of your fellow employees to complain with you - as Level 2 Complainers like to do - your insurrection will go badly.

Let's take your Family for example.  If you are a Level 3 complainer, then you can work through your problems in a positive way.  Your children will learn to deal with their needs in a healthy way.  You will know that whatever you have to face, there are options for you to embrace and consider as you work through it.