When The Light Bulb Goes Off. 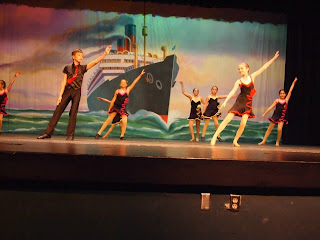 As most of you know, Anneka loves to dance.  Musical Theatre, Tap, Lyrical, Acro and Ballet.  Now here's the weird thing about all of this.  She is really, really good at it.  Anyone who knows me and Betty knows that we're known for a lot of things, but dancing isn't one of them.

So when Anneka wanted to learn how to dance, back when she was 3 or 4, I said - OK.  But in my mind I was thinking, "This won't last long."  Well, weeks turned into months and months and turned into years.  But, early this year I was seeing the signs that this was about to run its course.  Then the light bulb went on.

The photo above is exactly when it happened.  The dance was called, Spanish Panic.  And that smile on her face isn't the one that I had seen before.  This was the one that let me know.  We're going to be dancing for a long time.  That's what you see when the lightbulb goes on!

To say that I am proud of my daughter is an understatement.  There are many people, whom I trust that they know what they are talking about, who say again and again.  WOW!  So now we are going into this full speed ahead.  She has been cleared to go on pointe in ballet and Betty and I are dance parents.  (Nope, I didn't see this one coming.)

But here is the thing that you have to understand.  All of us have to have these "lightbulb" moments.  If you are real churchy you might call them "burning bush" moments.  Whatever you call it, it's that moment when it all clicks and you get it.  You want to serve God with all of your heart.  You want to do more than you ever have before.  There is a moment when God will speak to your heart and BOOM everything changes.  The smile on your face will be yours and it will be undeniable.  Enjoy it, embrace it and love it.  You may have not seen it coming, but when it happens - own it.

#1 - Model what you expect.  They will do what they see long before they do what they are told.
#2 - Be patient, don't force it.  The harder you push, the harder they will push back.  With practice you will know when you've done all you can do.
#3 - Don't lose your temper.  It's not your fault.  It's easy to yell at them, but don't.  That only discourages them.  You're working in God's timing, not yours.