Easter and There Is No God 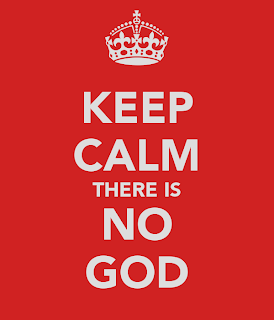 Someone once recently told me that they can't believe in God.  Well if that were true, there would be no Christmas, Easter or Thanksgiving.  Bummer.

Their rational is, "If He was really here, He wouldn't let the world be in the sad shape that it is in."  We've all heard this one before and probably wondered how we can respond.  Well, here are a few things you can think about.

Don't get defensive.  If the person just wants to start an argument.  Leave it alone.  But if they really want to delve into a legitimate conversation - go ahead.

Think about this.  God doesn't need your permission to exist.  He is God.  Just because you say there is no God doesn't disprove His existence.  You can say that air doesn't exist, but go ahead and try to live without it.  Yes, it's that basic.

Also.  If they understood God they would know that He works through the lives of men and women who call Him Savior and Lord.  If "nothing" is happening, it's because the church is doing, "nothing."  Well, a quick survey of the landscape will tell you that isn't true.  Now is the church doing enough?   I don't think so.  But you cannot say, nothing.

Then.  Jesus prophesied that in the last days, before His return, it would get pretty bleak and nasty.  Mankind would abandon faith in Him and would become lovers of themselves.  Yep, we're on track with that one.

So there is no God, huh?  I don't think so.  Here is my final point.  You assume that Jesus came to save, "this world."  Its economies, its governments, its systems - etc.  He didn't.  God made it clear that any of these things dedicated to glorifying Him would be blessed.  But Jesus didn't come to die for these things.  He came to live, die and rise again to live - for you.  He is more concerned with the condition of your soul than the stock market.  You're trying to fix a world that is doomed.  Jesus is trying to save your soul, which is also doomed.  This world can't be saved.  You can.  Believe in God and trust Him today.