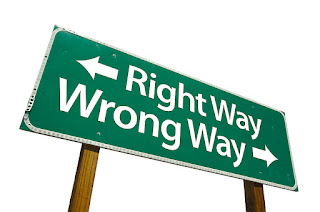 Pivot is a new catch word in the business world. It describes a business model shift.  Like the basketball maneuver of the same name, in which a player keeps one foot planted while changing direction with the other foot, a pivot occurs when a start-up tests a new direction while still keeping one metaphorical foot in the original business.

For some people pivoting can be hard because it requires them to set aside their convictions and pride.  They built the company with a certain set of values and goals in mind and those values and goals may have to change.

Here is an example of a pivot.

There was a a company called Confinity whose business strategy was to beam IOUs from Palm Pilot to Palm Pilot. (It was a way of paying dutch in restaurants that refused to separate checks for their customers)  When this didn't work they created a payment systems and called it PayPal. (PIVOT) This way they could email money to someone else (i.e. That part of that restaurant bill you needed to pay for.)  The e-Bay-ers discover Paypal and it started a explosion in e-commerce. (PIVOT) Then eBay bought PayPal for 1.5 billion dollars.  (Cha-ching!)

Pivoting in the church isn’t a bad thing.

For example.  When a church, whose long history has been very traditional and formal, discovers that young people desire those same qualities.  Then they update their format so these young people can connect to their church - PIVOT!

Does your church need to pivot?  Are there people out there that want what you have? Do you need to make some changes so they can connect to you?  What is keeping you from making these moves?

Pride and Ego keeps churches from making changes.  Peoples feelings and emotions can be attached to traditions and programs, even though they shouldn’t.  It is a plague on our church today.  When we value these things more than people, we build walls that prevent people from connecting.

Do you need to PIVOT?