Happy Birthday Betty - When giving presents feels like an insult. 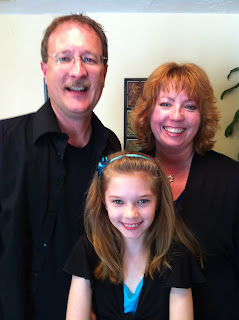 Everybody loves presents.  Little surprises wrapped in pretty paper waiting to be unwrapped and revealed.  Presents are tokens of our love and appreciation.  They are to communicate our feelings and emotions.  They are to represent what we really feel about them.  But I've got a problem.  I can't find, buy or even steal a present that comes close to what I feel.

You see, today is my wife's birthday.  I know I should do something, and I will.  But quite frankly, I don't know of anything that I can do that will truly, honestly and clearly say "I Love You."  The words themselves fail too.  I'm in a bit of a quandary here.

Betty and I met our first day in college in 1981.  I told her mother off and Betty immediately fell in love with me.  But the beautiful girl was WILD!  She was the light of the party and no matter how many people were in the room, she could get their attention.  (Some things never change, thankfully.)  She was way cooler than Madonna.  She even wore her bra in public long before the Madonna ever did and she did it on a Bible College campus too!  Long story.

She is a songstress that sings with a voice of the angels.  Did you know that the highest note ever recorded was by Sandi Patty?  (Star Spangled Banner)  To this day the only other person I know who can sing that note is . . .  you guessed it.  True, it's screaming on pitch, but at least it's on pitch!!

Any of you remember a choir named Revivaltime?  She sang for them too.  (The Dan Betzer years.  FYI Dan.  I was the skinny kid who sat in the audience.  Been nice sitting on the district presbytery with you too.)

Did you know that T. F. Zimmerman were her parents pastor in South Bend, Indiana?  That Lester Sumrall married them.  That she attended Calvary Temple AG under Roy Wead and Lee Lebsack?

Did you know that her aunt dated Elvis?  He even asked her to marry him.

Her mom loved southern gospel music and because Lester had a recording studio in South Bend nearly every famous group was there in concert frequently.  As it turns out, Betty knew just about every one of these music groups personally.  I really didn't understand this until I was at General Council in Indianapolis.  As we were walking down a hall and I hear someone yelling, "Excuse me! Excuse me!"  To which I turn around and see James Blackwood.  I was shocked. He turns to my wife and says, "You've got to be Jo Engstroms daughter."  I thinking, "Huh?"  She smiles and says, "Yes I am."  Then for the next 45 minutes or so these two catch up on old times.  She knows Jimmy Blackwood, Ken Turner, JD Sumner and more.  Wow?

When I asked Betty to marry me (while studying at the Pearlman Library - I know - not one of my classiest moves)  I had no idea what love and passion I was asking for.  Apparently her mom did, because when I asked for her hand in marriage she said, "Over my dead body."  I might have suggested   that I could arrange that.  Sorry about that Jo.

But I'm telling you, the woman doesn't understand or even have a concept of the word defeat.  That probably explains a few things for you.  Once she sets her sights on something - she goes for it.  You can either go kicking or screaming - or you can enjoy the ride.  Either way you are going.  Now by no means am I saying that she is a unsubmissive rebellious wife.  Never in a million years.  She understands Biblical marriage and family.  She is a champion for it.  But she also understands that submission is never and will never be an excuse to suppress ones heart, personality or passion.  Yes, she drives me crazy sometimes.  Crazy is ok.  Crazy works.

I have to be honest though, there have been a few times I thought the light of her passion would go out.  In 2001 we finally got the green light to have children.  God promised her a son and that his name would be Jordon.  One night in Okeechobee, Florida she started to miscarry.  I put her in the car and drove 42 miles to the hospital in 20 minutes or so.  (Don't do the math, I don't want to know how fast.)  We were too late.  But in the moment when we knew that Jordon was in the arms of Jesus, the Holy Spirit descended the ER and all I could hear was her singing.  "I Will Sing" by Don Moen.

Things didn't get better - they got worse.  Miscarriage #2, #3 and #4 were just as devastating.  I couldn't stand to watch her suffer anymore.  I told her we would try one more time, but this was it.  That's when Betty did what she does best.  Throw all the rules out and start doing things her way.  The transformation of her faith in just a few weeks was nothing short of amazing.  She knew that if she was going to bring a child into this world, it was going to require a miracle.  Fine - miracles it would be.

She believe that her words would bring life or death.  She spoke life and she lived it everyday.  I never seen anyone tick off so many doctors as she did.  On Valentines Day we thought that there was another miscarriage on the way.  This time I didn't see defeat in her eyes, it was outright anger.  "No."  she said, "I speak life and I speak health over this baby."  Well, the ultrasound not only told us that the baby was fine, but that it was a girl.  Later that day, God told us her name was to be Annkea Jordon August Jones.  In another ultrasound, the doctor found cysts on Annekas brain.  When the doctor told her to abort Anneka and try again, it didn't go well, for the doctor I mean.  After Betty got through, the doctor left the room cursing.  Another ultrasound, another bad report, more cursing.  Then after 6 weeks the ultrasound proved that the cysts were gone.  I know that it isn't polite to say, "I told you so."  But I let her do it.  More cursing.

Now how do you give a gift to someone like her?  Really?  I would love to buy her the island of Hawaii and give it to her.  She deserves it!  But all I can afford is a handful of sand and a pineapple.  Oh, I'll figure something out and it will probably be lame, knowing me.  But none the less there is a mom, a wife, a minister, a friend, a leader, a pastor, a singer, a Christian an amazing woman who is like no other.  That's why I love her.   Happy Birthday hon.  You deserve everything.