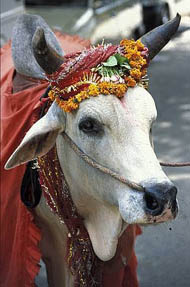 Joshua 3:4 Then you will know which way to go, since you have never been this way before. But keep a distance of about a thousand yards between you and the ark; do not go near it.”

The Israelites are now ready to cross over into the Jordan.  This was a very Big Day for them.  It was one that they had to prepare for - 40 years in fact.

There is a lesson here you may not want to learn.  Don't cross over, don't start a new business, don't change the direction of your life until you have prepared to do so.  But what does that mean?

Does it mean that the Big Day will go off without a hitch?  You hope so, but be prepared to make changes on the fly.

Does it mean that you will not be challenged in the future?  Absolutely not.  In fact you will be, without a doubt.  The goal of the Big Day is to get you off on the right foot.

Now the Law of Moses instructed the people to never, ever, ever touch the Ark of the Covenant.  That if anyone ever did, they would die.  If you don't understand why here is a simple explanation.  The presence of God resided on the Ark.  God is holy, without sin and perfect.  Because you and I are not holy, without sin or perfect - to touch the Ark would desecrate it and God.  (I'm having vision of Raiders of the Lost Ark right now.)

Because the Israelites worshiped God in the Tabernacle, there were lots of sacred items dedicated for use.  They were created to be used in the worship of God (who was at the Ark).  In other words, they didn't worship the altar, the golden candlestick, the censer or anything else in the tabernacle.  They worshipped God.

You need to know what is holy, what is sacred and what is a sacred cow in your life.

Holy is that which is not to be touched.  It is not negotiable.  It is not for sale nor is it to be desecrated in anyway.  Here are some things that you might consider to be holy to you.  Your family, God, your integrity, your core values and standards.

There are some things that are sacred in our lives.  As long as they don't interfere with what is holy.  These could be friendships, relationships, processes and goals.  One time snakes were biting and killing the Israelites.  (Let's just say they ticked God off and they had it coming.)  So God told Moses to make a bronze snake and if they would look at it they would be healed.  Some time later the snake had to be destroyed because people started worshipping it.  If those things which are sacred to you begin to interfere or desecrate what is holy - it isn't sacred anymore.  It's a . . .

. . .  sacred cow.  We get this term from Hinduism.  They believe that people are reincarnated as living beings, such as cows.  So they don't eat them or bother them.  We use the term today to figuratively address something that is considered to be above question.  We don't kill them or bother them either.

The problem with sacred cows is that they are not sacred and they are big cows causing all sorts of problems for you and your team.

Remember that the Israelites made a golden calf (cow) while Moses was talking to God?  (10 commandments stuff).  One of the reasons why they had to wander in the desert was to teach them to rely on God (that which is holy) and to trust that which was sacred.  But to kill their need for sacred cows.

If you have some sacred cows in your workplace, in your church, in your family or in your life.  You need to deal with them.  #1 - Don't butcher them.  To bloody and for those who still worship it, to violent.  That will cause an insurrection.  #2 - Lead the cow away from your people and from your heart.  Live without it for a while.  Oh there will be complaining and griping.  But in time the cows influence will fade away.  #3 - Dismiss the cow without any pomp or circumstance.  When someone asks about the cow, let them know that you haven't relied on that cow in a long time and that they don't need to either.