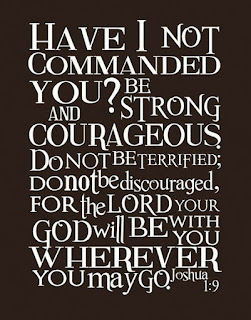 There are some within Christianity that would chastise anyone for experiencing fear or discouragement.    That one has a lack of faith and that if they would simply "grow up" they would be afraid.  That's junk theology.  Follow along.

Choices make a big difference in our life.  But you and I live in a culture that doesn't want to make decisions anymore.  Either they have given up, because being strong and courageous is a waste of time.  Or they have given in to their fears and turned their problems over to someone else to deal with.  BAD IDEA!  But it's the truth.

Here are a few things that you need to understand.  Don't follow people who are willing to make life decisions for others.  That's too much power for one person to handle.  Only Jesus can do that.  Don't follow people who are willing to allow others to make their decisions for them.  They don't know where they are going, so believe me, you don't want to go there either.

Here is another thought.  When Moses made the decision to march into Israel the first time, the people wanted to go back to Egypt.  That didn't go well.  A slavery mentality doesn't lead anywhere but into slavery.  If you are going to lead people, lead them out of slavery.  But if they don't want to go, don't get mad (like Moses did).  There is another generation that wants to be led away from their past.  Find them and lead them.  They are the ones who will be strong and courageous.