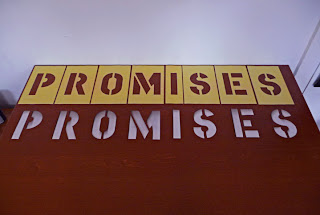 Joshua 1: 3 - 4  3 I will give you every place where you set your foot, as I promised Moses. 4 Your territory will extend from the desert to Lebanon, and from the great river, the Euphrates—all the Hittite country—to the Great Sea on the west.

Funny thing about vision.  “What’s in it for me?”  This is a good question and a bad one at the same time.  It isn’t wrong to ask it, but then again, it’s wrong to ask this question.  Confused?  Let’s sort it out.

God has a vision for you.  Jer 29:11 promises that.  Do you want to know what His vision is for you?  Really?  When we ask, “What’s in it for me?”  Are we asking from a selfless or selfish point of view.  Then when we discover what Gods plan is for us, do we think that we can argue it, change it or redirect God from it?

The thing about vision and future is the dark side.  I call it the dark side because that’s the way we see it.  God doesn’t see it that way, but then again, we rarely see things God’s way do we?

Joshua is promised the land, everything that is on that land and a LOT of land.  Sounds great, right?  But what are they going to have to do to posses that land?  They are going to have to use a lot of faith and do a lot of fighting.  God never said that it was going to be easy, He just promised that they would be successful.  Dark side - get it?

We will discover how to deal with the dark side in a little while.  But for right now - there is a promise that needs to be understood.  Promises from God are just that - promises.

#1 - Know what is it that you know that God has promised you.  The promise may be 40 years old.  It may not.  But whatever it is - don’t give up on your promises.

#2 - Know what God is saying to the group.  It could be a church, a core group of leadership, a family.  Whatever it is, know what the promises are and in God’s timing, declare them - often and loud!  We are a forgetful bunch, especially when we are in trouble.

#3 - Know what God is saying to each person.  I don’t mean that you need to know what God is doing in every life specifically.  (Even though God will probably let you in on some plans.)  Know how the promises will effect the people.  Let them know how they will be blessed for their faithfulness unto God.

So let’s run through this with Joshua.  God promises Josh that he would receive the land everywhere he set his foot.  WOW!  But what did that mean to the group?  Well that meant each tribe of Israel (except the Levites) were going to get their own land.  That meant that each person of each tribe were going to get their own house, farm or business.  Everything that they found was going to be theirs.

So how does the vision God has given you bless your people?