Tuesday is messed up! 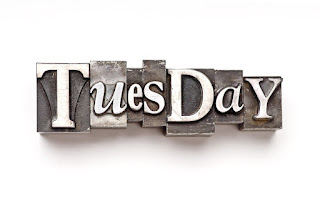 So I did a little research and discovered where we get the name Tuesday from. It’s an old English word that a god from Norse mythology.  In some traditions Tuesday is Wednesday and Wednesday, well, I don’t know where they put it.  That might have been because for a little while there were 8 days in a week instead of 7.  Now in most other culture Tuesday is named after Mars, the Roman god of war.  In Japanese the word means ‘fire day’.  In other languages it means ‘one who is red in colour’.  You know Mars is red and, well, you can connect the dots.


In the Eastern Orthodox Church Tuesday is dedicated to John the Baptist.


In the Greek world, Tuesday is considered unlucky.  Some Spanish speaking cultures think that too, especially if it falls on the 13th.  Jews consider Tuesday to be lucky because in Genesis 1 God said it was a good day - twice.  Well that’s got to mean something - right?


In the folk rhyme Monday’s Child, “Tuesday child is full of grace.”


Confused?  I am.  Now I know that I’m known to be the cesspool of useless knowledge, but follow me here.


God wasn’t confused when he made you.  He knew what He was doing and He believes in what He created.  True you will find the phrase “it was good” twice on Tuesday.  But I honestly think that He has a lot more to say about you that is wonderful, beautiful and inspiring.


In our confusion we can become disillusioned.  Why am I here? What is my purpose in life?  What am I suppose to be doing?  Is this it?  It’s when we discover God’s purpose for our lives that the answers to these questions can be answered.


Sure there are people who say they have found their life’s calling.  But is God in what they are doing?  If you are a pastor or a software engineer - what is God calling you to do?  Do be like Tuesday!  Be like Jesus!