When We Speak In Tongues 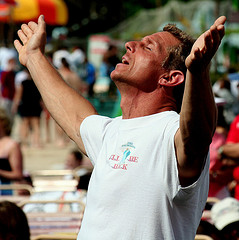 In Acts 2 we see 120 people speaking in other tongues.  A few minutes later Peter gives an altar call and 3,000 people were added to the church that day.  WOW!!
But think about this.  Would these 120 have been able to replicate these results without the Baptism in the Holy Spirit?  The simple answer is, No - they couldn’t.  They needed God’s help.
There has been a lot of debate about how this happened?  Well as I read Acts 2 I read that 120 people spoke in tongues and a crowd of people heard the praises of God in their own tongues.  Realizing that these people were not fluent in their native language they recognized that they were in the presence of God and that they were witnesses to a miracle.
Fast forward 2,000 years.  What has changed?  The world has, but God hasn’t.  He is still working the same way He did 2,000 years ago - at Azuza street - In Pentecostal churches during the Charismatic Renewal of the 70’s - In AG churches all across the midwest and south - and today!
Pentecostal Christians are still speaking in tongues and the world is STILL responding to it!