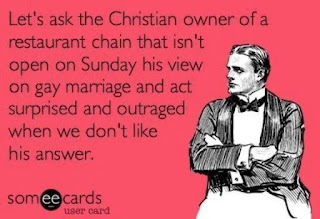 Am I homophobic?  (unreasonable fear of homosexuals )  NO!


Do I agree with homosexuality?  No


Why?  Because The Bible says that it is a sin - and as such - these people are doomed to spend eternity in hell for this decision.


What do I do?  I welcome homosexuals to attend church with me - they will not find themselves in a hostile environment.  I welcome their friendship.


Why would I do that?  I love them so much that I want to get to know them and for them to know me.  Before I say anything about their lifestyle I want them to know who I am - for my words to mean something - for my actions to have the opportunity to prove what I say.


Will I eat more chicken today at Chick- Fil- A?  Yes.


Why?  Because I believe that any person in this country has the right to say that they are a homosexual and that any person in the country has the right to disagree with that statement.  I’m not eating chicken to send a message to the homosexual community that I hate them - I am sending a message that I will not tolerate someone rights being trampled on.


When we, as a country, decide that it’s wrong to disagree with someone else, that’s the moment that liberty ceases to exist.  Is this a political statement?  I guess so.


So let me make a spiritual statement.  Jesus loves you!  Let me prove it to you!