Are There Zombies in the Bible? 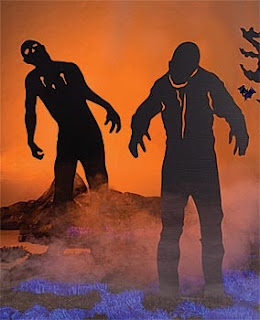 Are There Zombies in the Bible?
Matthew 27: 51 - 53  51 At that moment the curtain of the temple was torn in two from top to bottom. The earth shook and the rocks split. 52 The tombs broke open and the bodies of many holy people who had died were raised to life. 53 They came out of the tombs, and after Jesus’ resurrection they went into the holy city and appeared to many people.
Now let’s not get into the whole “theology of zombies” thing here.  I’m not trying to establish that.  But the whole, dead, un-dead thing here is pretty awesome.
Next month, on Sunday’s at 10:30 a.m. I am going to preach a series entitled, “How to minister to Zombies.”  The point of this series is simple.  Supernatural problems need supernatural solutions.
There are LOTS of people in this world who are the “walking dead”.  Dead in Christ but alive in this world.  They look at those of us who have put our faith in Jesus and think that we are “crazy”, “possessed” or “brainwashed”.  We are alive in Christ and dead to this world!  Somebody say AMEN!!
So the question is - do you know any Zombies?